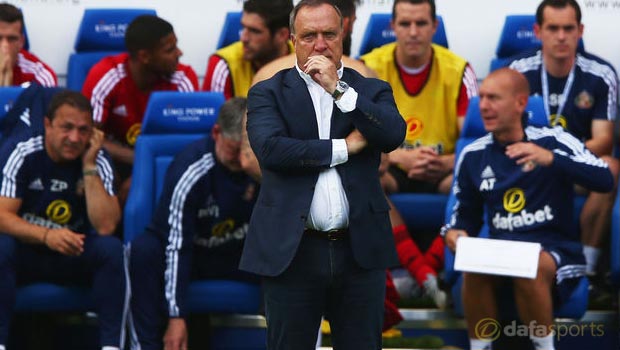 Sunderland manager Dick Advocaat is hoping the arrival of more new players before the close of the summer transfer window will help to force current members of the squad out of the exit door.

Five new faces have arrived at the Stadium of Light with Adam Matthews, Sebastian Coates, Younes Kaboul and Jeremain Lens all signing permanent deals while Yann M’Vila joined on a season-long loan.

However the Dutch boss, who has signed a one-year contract, is still looking to strengthen his squad and the 4-2 opening-day defeat to Leicester City has highlighted the areas that require improvement.

It may be difficult for the Black Cats to bring in the players they want at the moment as they are currently operating close to their financial limit in terms of wages.

Advocaat believes that more new faces will help to trim the overall squad and will force the unwanted players out of the exit door and onto pastures new.

He told the Echo: “I always say, and maybe not everyone agrees with me, that if you bring players in, then some will go. As a player, if I’m happy here and no one comes in, then I think I’ll have a chance.

Sunderland have already offloaded Santiago Vergini and El-Hadji Ba but Will Buckley, Liam Bridcutt, Valentin Roberge, Charis Mavrias and potentially one of strikers Steven Fletcher and Danny Graham are also said to be under pressure.

The Black Cats will be looking to bounce back when they welcome Norwich to the Stadium of Light on Saturday and the hosts are 2.50 favourites, a draw is 3.20 while the visitors are a 3.00 shot.