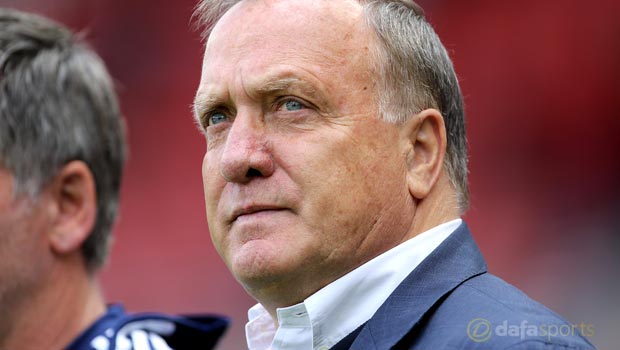 Head coach Dick Advocaat is confident that Sunderland will create chances when they take on Manchester United at Old Trafford.

The veteran Dutch tactician has yet to taste victory with the Black Cats in the Premier League this season but, despite them currently propping up the table, Advocaat was being bullish ahead of a trip to Manchester.

Advocaat told reporters: “Normally United would beat us, but we can give them a really tough time. That will happen, you will see.

“You have nothing to lose against United and if we are well-organised, and try to hurt them a bit, then why not? We will have opportunities to score.”

Advocaat’s plans for an attacking approach could be hampered by the absence of striker Jermain Defoe, with the former England international being troubled by a hamstring problem, although he is expected to feature.

As well as Defoe, Advocaat has a doubt over midfielder Jack Rodwell due to an ankle injury, with the combative Lee Cattermole standing by to deputise.

United have injury problems of their own on the left side of defence, with Luke Shaw sidelined after breaking his leg and potential replacements Marcos Rojo and Paddy McNair both ruled out.

Sunderland have failed to score in either of their last two league games, going down 1-0 to Tottenham and 2-0 at newly-promoted Bournemouth, while in midweek they were thumped 4-1 at home by Manchester City in the third round of the Capital One Cup.

The Black Cats are 5.00 to score first at Old Trafford and are 11.00 to keep a clean sheet against United.