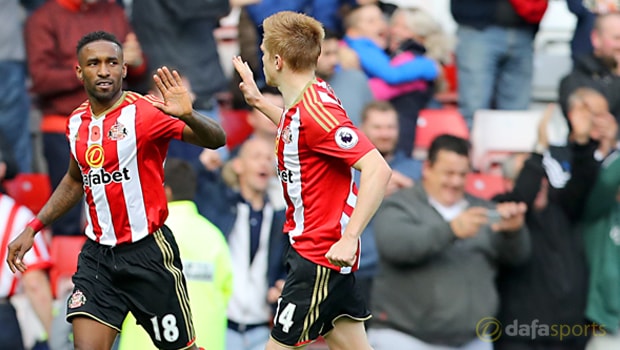 Sunderland forward Jermain Defoe is expecting to miss out on an England call-up even if he helps the club avoid relegation.

The Black Cats, 1.14 to go down this season, sit rock bottom of the Premier League after only winning 19 points from their first 26 games.

David Moyes’ men have won just one of their last five Premier League matches, although that was a 4-0 success over relegation rivals Crystal Palace.

Although some think they are already down, Sunderland would arguably be in a worse position without Defoe, who has scored 14 league goals so far this season.

Sunderland have only found the net on 24 occasions in the league but Defoe does not expect his personal form to win him an England call-up.

The 34-year-old is waiting to find out if he will play any part in this month’s clashes against Germany and Lithuania but he is not getting carried away.

He told Sky Sports: “I feel like I should have been involved last season if it’s based on merit and stats – on who’s scoring goals.

“I was in the England squad for like 10 years, and probably most of that time I was at Tottenham scoring goals. There were times where I wasn’t even playing but I was still in the squad because of the goals I scored before.

“So I don’t know. I’ve always been a positive person, but there comes a time where you think, ‘Is it really going to happen?’

“All I can do is keep playing well. The English fans – I read some nice stuff on social media and in the press too.

So for me it’s a nice feeling that people want me back into the squad. At the end of the day it’s up to the manager so we’ll see.”