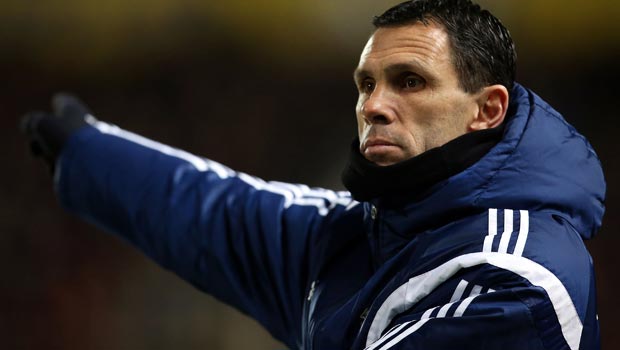 Sunderland boss Gus Poyet is hoping that giving his players a break will boost them in their battle to avoid relegation from the Premier League.

After their dismal FA Cup exit at the hands of League One Bradford City in the last round, it means the Black Cats are not in action this weekend.

Poyet has decided not to call players in for training either on Saturday or Sunday, instead he wants them to take their minds off football and have some rest ahead of a busy period in the Premier League.

Sunderland sit 16th in the table after 28 games and have a four-point cushion on the bottom three. However, they have not won in five matches and needed a late strike to snatch a point at Hull last time out.

Coming up for Poyet’s side is a tough run of fixtures, starting with a game against 17th-placed Aston Villa at the Stadium of Light next weekend. Then comes a clash at West Ham, a Wear-Tyne derby with Newcastle and a home game against Crystal Palace.

It could be a pivotal run of games for Sunderland in their battle to retain their top-flight status and Poyet is confident that giving his players a break this weekend will ensure they are prepared both physically and mentally for the tough few weeks that await them.

Poyet said: “We’re going to give them the weekend off.

“I think you can look at it in two ways. If I was worried about something in particular that is workable, you can do something on that.

“But as I’ve said a few times, the mental side of it is very, very important.

“I think the players need a rest away from football.

“When you look what is coming next, it’s going to be a big mental test.”

First up in that tough run for Sunderland is a home game with Aston Villa, and the Black Cats are priced at 2.20 to get the victory while Villa are on offer at 3.01 and the draw at 3.19.