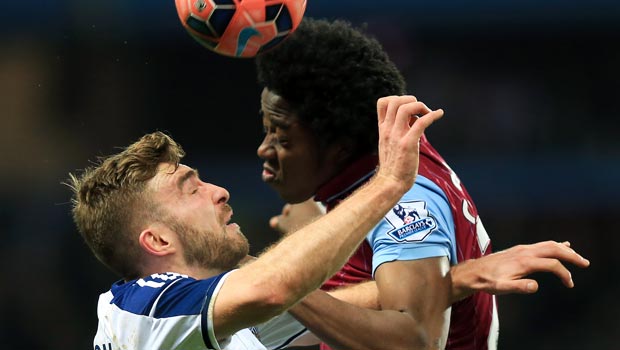 West Bromwich Albion midfielder James Morrison reckons the midweek league defeat to Aston Villa gives them “extra motivation” going into the next meeting of the two teams in the FA Cup.

Tim Sherwood saw his Villa team secure their first win under his tenure when they beat the Baggies 2-1 at Villa Park on Tuesday night, with a late Christian Benteke penalty giving the home side a valuable three points in their battle against Premier League relegation.

The two teams meet again on Saturday evening in an FA Cup quarter-final clash and West Brom have a chance for some quick revenge over their rivals.

There has been extra spice added to the game after Sherwood referred to Albion as “a good little club” and then, after the victory, said they “will have to improve if they are to stop us going to Wembley”.

Baggies midfielder Morrison admits the side were disappointed with the midweek game as they didn’t match the standards set in previous matches since Pulis took over at the Hawthorns.

The Scotland international, who earned his 200th appearance for West Brom at Villa Park, knows they need a good reaction in order to give the fans something to celebrate this weekend.

Morrison said: “The manner of the defeat is extra motivation, especially seeing them celebrate like they’d won the cup – not least as they’d been struggling and won it with the last kick of the game.

“We’re glad to have this game. It gives us a chance to get over it

“To lose with the last kick of the game really hurts.”

West Brom will be without captain Darren Fletcher for the FA Cup quarter-final as he is cup-tied, while Victor Anichebe has a groin problem and Callum McManaman is considered doubtful.