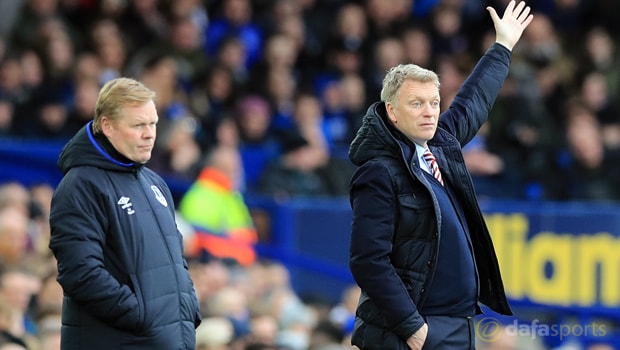 Sunderland coach David Moyes insists his side needs to build on their second-half display in their 2-0 defeat to Everton on Saturday.

The Black Cats traveled to Goodison Park with plenty of pressure on their shoulders as they continue to sit bottom of the Premier League table.

Moyes’ men were beaten 4-0 by Southampton in their last game and managed to hold Everton off until the 40th minute.

Toffees midfielder Idrissa Gueye opened the scoring but Sunderland rallied and tried to find an equaliser.

The Black Cats pushed and Jermain Defoe rattled the crossbar before Romelu Lukaku wrapped up the game for the home side with the decisive second goal.

Saturday’s defeat leaves Sunderland with one win from their last five league games but Moyes was quick to take the positives from the performance.

“I have shaken the players’ hands in the dressing room and said keep it going,” the Scot told Sky Sports.

“The second-half performance was good, the first half wasn’t good enough, but they showed a bit of bottle to take the ball and pass it better in the second half and try to play.

We have to try to build on that. “We did ever so well to make sure it was only 1-0, we stayed in the game and were hoping we could nick something.

We earned our chance, we grew into it, played better, but ultimately we didn’t get it and then gave away a second goal. “You have to remember the quality of Everton, where they are and what they are trying to achieve.

We are trying to achieve different things at the other end of the table, so there is a gulf in the quality of
player.”