Sunderland v Liverpool: Luis Suarez back with a brace 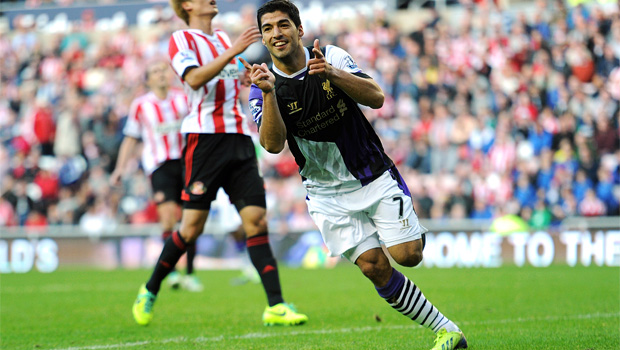 Luis Suarez was quickly back among the goals on his Premier League return, netting twice in Liverpool’s 3-1 win at Sunderland.

The Uruguay striker returned to action in the Capital One Cup defeat at Old Trafford last week but with that outing under his belt he was always going to be a threat to a Sunderland defence that had already leaked 11 goals in five league games.

With the Black Cats still in turmoil after Paulo Di Canio’s departure, Brendan Rodgers looked to capitalise by taking all three points and saw his side go ahead after 28 minutes when Daniel Sturridge converted from a corner.

It looked as though the England striker had scored with his head, but replays showed that the ball actually came off his arm, albeit unintentionally.

“I’ve obviously tried to head it but I guess my heading is not good enough, is it?” Sturridge said. “I’ve missed the ball, it’s gone in off my arm but I wouldn’t do that on purpose. Sometimes these things happen.”

There was no fluke about either of Suarez’s goals, however, the first in the 36th minute from close range after Sturridge set him up, and the killer in the 89th minute as once again Sturridge turned provider.

In between the home side gave themselves brief hope early in the second half when Emanuele Giaccherini capitalised on Simon Mignolet’s mistake to score, but at the final whistle it was Liverpool that collected all three points to go second behind Arsenal in the table.

Rodgers praised his side’s work ethic and also hailed the contribution of his strike force.

“On the back of a really tough game where we played well during the week, today was always going to be a really physically demanding game for us,” he said.

“I thought the work we put in today was exceptional. To get the three goals and a few more chances to score, I thought we were really dangerous on the counter-attack. As a team we worked really, really hard.”

Next up for Liverpool is a home fixture against Crystal Palace on Saturday, while for Sunderland it doesn’t promise to get any easier as they entertain Manchester United in the lunchtime game.