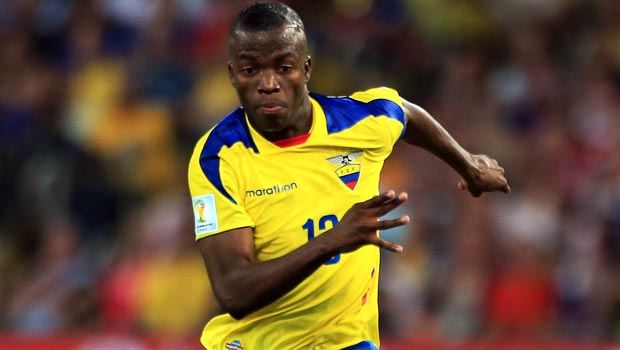 Valencia, who plays for Mexican side Pachucha, was a big hit in Brazil, scoring three goals for his country, but the 25-year-old had already made his presence felt when scoring a header against England in the 2-2 friendly prior to the tournament getting under way.

Downing pointed out that West Ham’s problem last season was lack of quality up front.

“For large parts of last season we played without a striker. We can’t rely on Andy (Carroll) all season.

“He was the big signing last season, but Andy struggled with injuries so hopefully the new signings will take the pressure off him a little bit. And from what I’ve seen of Valencia against England, he looks a very good player.

“He can nick a goal and it is competition for places. It’s what we’ve needed as we didn’t have that last season. It will help the manager that he has options and he can bring other people in who can perform straight away.”

Valencia scored 18 goals in 23 appearances for his club and if a deal is done it would give the Hammers a much more potent strike force, with Argentinean Mauro Zarate having joined in May, while Sam Allardyce has also boosted the midfield with the recent signing of Diego Poyet from Charlton.

West Ham begin the new Premier League season with a London derby at home to Tottenham on August 16, and are 3.07 to win with Dafabet.