Posted by Robert Morris on September 7, 2014 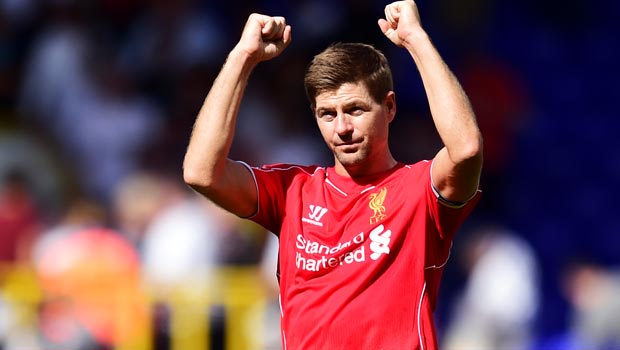 Steven Gerrard is adamant that Liverpool can “mix it with anyone” in the Premier League and he is confident that they will be fighting it out for the title once again this season.

The 34-year-old midfielder went close to becoming the first Reds captain to lift the league championship for 24 years last term before they were pipped at the post by Manchester City in an enthralling title race.

Liverpool have since lost top scorer Luis Suarez to Barcelona over the summer, but boss Brendan Rodgers reinvested over £100million back into squad strengthening to bring in the likes of Mario Balotelli, Emre Can, Adam Lallana, Rickie Lambert, Dejan Lovren, Javier Manquillo, Lazar Markovic, Alberto Moreno and Divock Origi.

Gerrard has also retired from international football with England to devote his time to playing for the Merseysiders and he is looking for the club to at least win some silverware and secure another top-four Premier League finish.

However he sees no reason why Liverpool, who are back in the Champions League this term, should lower their sights from going all out to win the title.

He said: “Without getting too carried away, I think we are now a very good team and I think we can become excellent as there is still room for improvement.

“The rule at Liverpool is quite clear – you try to win every competition you enter.

“(Brendan) Rodgers has been here for two years and I think he is desperate to get a trophy in the cabinet – that is goal No.1.
“It is very important we maintain our place in the Champions League.

“But after the journey we went on last year, and the confidence we gained from it, I think we are genuine title contenders. We have proved we can mix it with anyone in this league.”

Liverpool are 11.00 to win the Premier League this season, while they are 65.00 to win both the FA Cup and Capital One Cup.