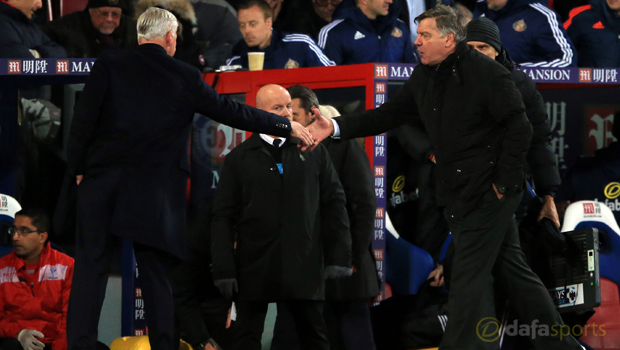 The Scotland international has scored four of the Black Cats 13 league goals so far this season as the side sit in 19th position – four points adrift of safety – with just one win on the board.

That victory came in Allardyce’s second game in charge, in the Wear-Tyne derby against Newcastle at the Stadium of Light, after he took over from Dick Advocaat in early October.

The 61-year-old has witnessed Sunderland lose their three other games under his leadership, but Fletcher insists that he can see improvements and hopes they can get more points on the board in Monday night’s trip to face Crystal Palace.

The 28-year-old has scored three goals in his last two visits to Selhurst Park, including a brace in last season’s 3-1 victory, and he claims the team are looking forward to facing Alan Pardew’s Eagles.

While Fletcher, who is 3.80 to score at any time on Monday night, also claims they are becoming accustomed to the way Allardyce wants them to play and that should start to become evident in their performances.

He told Sky Sports: “The new gaffer’s putting his ways across and the boys are slowly coming into it.

“I think he’s got his own way of playing; we’ve seen that at the other clubs he’s been at and obviously with our last manager it was different.

“With someone new, they come in and want us to play the way they play and every player has to adapt to it. We’re working on it in training and in games as well. The matches come thick and fast over Christmas so sometimes you don’t have a chance to go over it.”

Sunderland, who were also boosted by young striker Duncan Watmore signing a new deal four-year deal to stay at on Wearside on Sunday, are 6.00 to win on Monday night. Palace are 1.57 and the draw is 4.00.