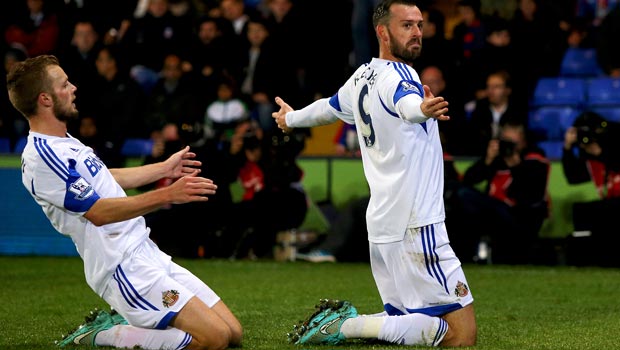 Sunderland manager Gus Poyet has told his side to continue to create chances for striker Steven Fletcher following his two goals in the 3-1 win at Crystal Palace.

The 27-year-old Scotland international doubled his tally for the season with his brace against the Eagles on Monday evening, with Poyet suggesting that Fletcher will be a key figure in the fight to avoid relegation this season.

Poyet, speaking after a win which lifted his side out of the bottom three at the expense of Leicester City, said: “He has been outstanding in training and he has been a really refreshing player to watch.

“If we put the ball in there for him I’m sure that he’s going to score plenty for us. It’s up to us to create, he’s the finisher. We need to give it to him, for him to finish.”

Fletcher has been hampered by a number of injury problems since his move to Wearside in the summer of 2012, netting just three goals in the 2013/14 campaign.

However, the season before he netted 11 times as the Black Cats avoided relegation to the Championship by just three points.

Next up for Sunderland and Fletcher is a visit from Everton on Sunday, with the last three meetings of the two teams having been decided by a single goal.

Last season both fixtures were won 1-0 by the away team, while the Black Cats edged a 1-0 victory at the Stadium of Light in April 2013, with Stephane Sessegnon the goalscorer.