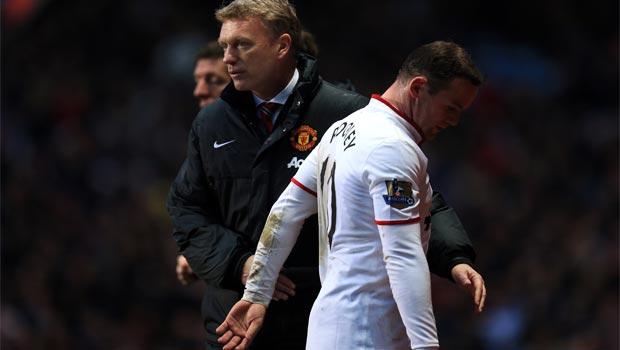 Manchester United manager David Moyes hopes to have Wayne Rooney available for the visit of West Ham on Saturday after revealing that the talismanic striker has picked up a groin injury.

The England striker missed the trip to the Britannia Stadium with Moyes’ sparking fears that Rooney could be sidelined for the busy festive period in his pre-match TV interview when he revealed the problem.

However, speaking after the game, the Scotsman said that Rooney’s injury is not too serious and that he could be fit for Saturday’s Premier League game against the Hammers at Old Trafford.

When asked if Rooney could be available this weekend, Moyes replied:
“He has got a chance, yes.”

United are already without last season’s 26-goal Premier League top scorer Robin Van Persie until the New Year and the loss of Rooney could all but end their title defence if it led to more dropped points.

Statistics show that United have suffered without the 28-year-old striker in his ten year stint at the club with an overall win percentage of 70.5 per cent when Rooney starts in the Premier League compared to just 61 per cent without him.

The difference is even more marked this term with United winning six of thirteen matches with Rooney from the start (46 per cent) but only one of the three matches that the frontman has missed.