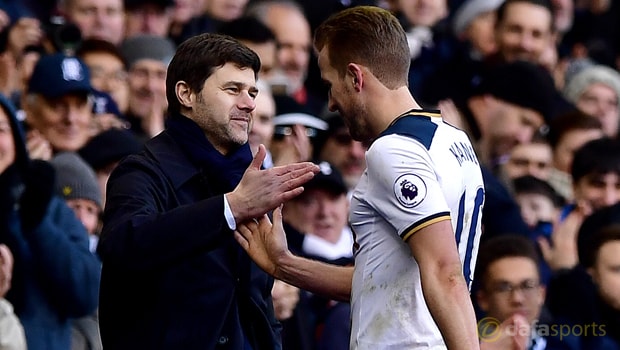 Mauricio Pochettino feels Tottenham now have momentum in the title race after they recorded a sixth straight win by defeating West Brom at White Hart Lane.

Spurs thumped four goals past the beleaguered Baggies in a dominant display, Harry Kane netting a hat-trick alongside an own goal from Gareth McAuley.

But for some outstanding saves from Ben Foster in the visiting goal, Spurs could have won by a vast margin.

Having defeated league leaders Chelsea in their previous league outing, Pochettino was keen before kick-off to make his players aware they would be throwing away that good work if they failed to collect three points against West Brom.

Having been in the heat of a title race last season, Pochettino says his players are showing they’ve learned lessons from their efforts. “It was a great performance.

We are showing a good maturity. The team learned a lot from last season and we [have] very good momentum,” he said.

“If you want to fight and challenge for big things we need to follow performances like Chelsea with this one.”

Kane’s latest treble, his third, means he has now joined Jermain Defoe and Robbie Keane as the only Spurs players to achieve the feat three times since the Premier League’s inception.

Coming at the end of a week where the England forward became a father for the first time, Kane admitted it was a perfect moment.

“The week has been a whirlwind having a little daughter – to finish it off like this is the best way possible,” he said.

Spurs face Manchester City next Saturday at the Etihad Stadium. They are 3.50 to complete the league double over Pep Guardiola’s team, who are 2.05 with the draw 3.40.