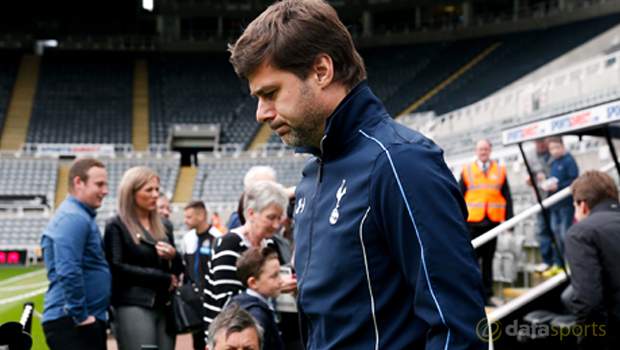 Mauricio Pochettino felt Spurs’ 5-1 defeat at the hands of relegated Newcastle at St James’ Park was his ‘worst day in football’.

Tottenham needed just a point from their trip to Tyneside to secure second spot and finish above north London rivals Arsenal for the first time in 21 years.

Despite dominating possession and Newcastle finishing with 10 men, it was the home side that romped to victory.

Georginio Wijnaldum and Aleksandar Mitrovic scored in the first half before Erik Lamela reduced the arrears on the hour mark.

When Mitrovic was ordered off seven minutes later, it looked as though Spurs were being given a reprieve to gain the point they required.

Instead, Wijnaldum netted from the penalty spot while Rolando Aarons and then Daryl Janmaat scored two in a minute late in the game.

With Arsenal thumping Aston Villa 4-0 at the Emirates, it meant Spurs dropped to third spot – having taken just two points from the last 12 available to them.

There was no hiding place for Pochettino in the aftermath. “I think today we showed that this wasn’t a team that had played well through the whole season,” he told reporters.

“I think this was my worst day as a manager in England or Spain.” Meanwhile opposite number Arsene Wenger was happy to overtake Spurs and maintain his record of never having finished a Premier League campaign behind the Gunners local rivals.

“We don’t start the season and think we want to finish above Tottenham but today we played with the only target we had.

Today the aim before the game was to finish second. “We achieved it,” said Wenger. Arsenal are 6.50 to win the 2016/17 Premier League, with Tottenham available at 7.00.