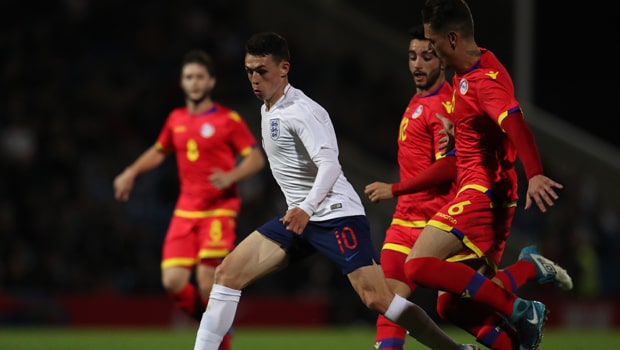 Manchester City starlet Phil Foden was described as an “eel” by England Under-21 coach Aidy Boothroyd after an impressive debut for the side on Thursday.

The Under-21s secured their place in next summer’s Euro 2019 finals with a game to spare following a 7-0 rout of Andorra at Chesterfield.

However, it was the display of 18-year-old Foden that caught the eye, with Boothroyd clearly impressed by the youngster.

“Phil is a real team player,” he said. “When he gets the ball in difficult positions, he wriggles out of it like a little eel. “Considering he hasn’t played a game with this group of players, I thought he took to it really well.”

Despite his tender years, Foden has made three Premier League appearances this season and five in all competitions, bagging a goal in the Carabao Cup victory over Oxford United.

It remains to be seen how much top-flight action he sees throughout the rest of the campaign but it seems as though he will gain experience through the cup competitions.

The Stockport-born midfielder could therefore do with City going deep in the EFL Cup to aid his chances of England selection.

The Young Lions are next in action when they take on Scotland on Tuesday and Foden will hope to impress, with one eye on City’s next Premier League game at home to Burnley on October 20.