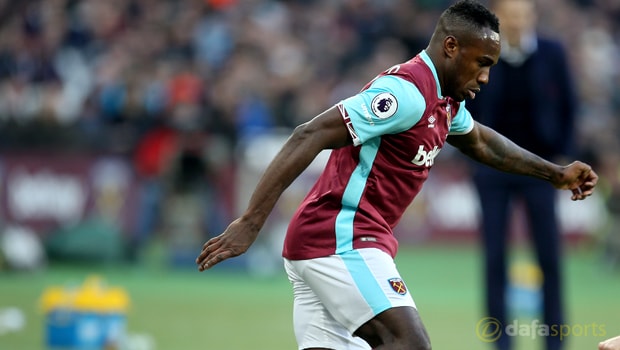 West Ham manager Slaven Bilic has revealed Michail Antonio’s future at the club is set to be tied up in the coming days.

Antonio joined West Ham in the 2015 summer transfer window from Nottingham Forest on a four-year contract for a fee believed to be around the £7million mark.

The 26-year-old winger has gone from strength to strength since joining the Hammers and has become an integral part of the first team, scoring 16 goals in 46 Premier League appearances.

He was rewarded with a call-up to England’s senior squad although he was an unused substitute for the 2018 World Cup qualifier in Slovakia last year.

There were doubts regarding Antonio’s future at the club this month, with reports suggesting Chelsea boss Antonio Conte was interested in signing the player.

However, the rumours seem to have disappeared now and Bilic has confirmed a new contract should be wrapped up for the winger shortly.

“It’s a club decision of course, together with mine. But I give him a big time green light to sign a new deal with us,” he said.

Antonio has already scored eight times in the league this season, matching his tally from the previous campaign, and will be hoping to continue his fine form at the Riverside on Saturday.

The Hammers are 3.00 to clinch all three points against Middlesbrough, the draw is priced at 3.10 while Aitor Karanka’s men are the narrow 2.38 favourites.

New Boro signing Patrick Bamford could be handed a start after arriving from Chelsea on a four-and-a-half-year deal for a fee in the region on £6m.