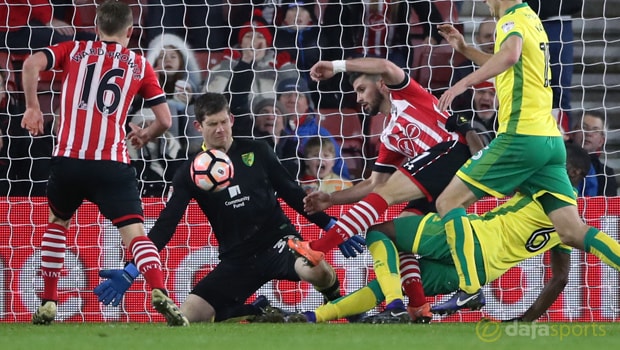 Shane Long has called for the fans to spur Southampton on to victory when they take on Arsenal in the fourth round of the FA Cup on January 28.

Saints squeezed past Norwich City in a third-round replay on Wednesday night after Long scored a dramatic stoppage-time winner at St Mary’s.

It was the Republic of Ireland internationals first goal in the competition this season and just his second for the Saints in all competitions.

Claude Puel’s men have been rewarded for disposing of the Canaries with a fourth-round tie at home against the Gunners, who have won the FA cup 12 times – sharing the record for most wins with Manchester United.

The French tactician, who took charge of the English outfit last summer after leaving Nice, has already dumped Arsenal out of the League Cup this campaign and will be hoping for a similar result in the FA Cup.

Long knows it will be extremely tough but feels victory is within Southampton’s grasp.

“We always seem to meet them in the cup but it’s going to be a great game,” he told the club’s official website.

“Hopefully it will be a big turn-out and the fans will get us through that one as it’s always a tough one.

“They’re a good side and I think they might make a few changes as well, which they normally do, and it could be an evenly contested game.”

Southampton’s immediate focus is on Saturday’s clash at home to defending Premier League champions Leicester City, who are struggling in 15th position.

The hosts are firm 1.85 favourites to pick up all three points, the draw is priced at 3.30 while the Foxes are 4.33 outsiders.