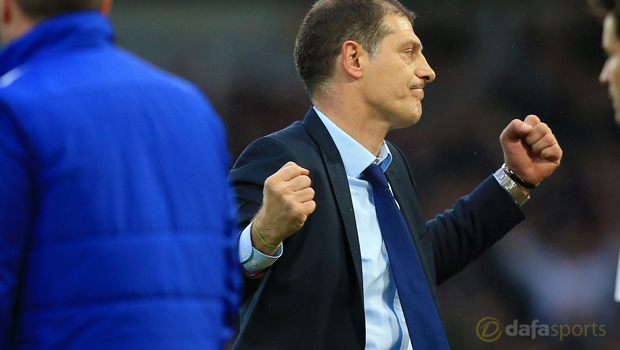 West Ham boss Slaven Bilic sees no reason why his side should fall down the Premier League table, but he does expects a tough clash with Watford on Saturday.

The Hammers have been the surprise team in the early part of the season and currently sit in third place in the top-flight standings with 20 points from 10 games.

They have already taken the scalp of Arsenal, Liverpool and Manchester City away from home, while champions Chelsea left Upton Park with nothing to show for their efforts last time out.

And Bilic remains optimistic that his charges will be there or thereabouts next May.

“It’s only still the start but we are confident. There’s going to be ups and downs results-wise but I don’t see why it should drop,” he told reporters on Thursday morning.

“Our goal is to try and win as many football games as we can and to play as attractive football as we can. It’s still early days.”

Next up for the Irons is a trip to Vicarage Road to face the Hornets, who have settled back into life in England’s top division well, with 13 points from 10 games seeing them sit in 13th spot in the table.

And the 47-year-old former Croatia manager believes his men will need to be at their very best if they are to return from Hertfordshire with all three points.

“It will be a tough game on Saturday because they are a hard team to beat. They are also a new team who are improving week by week,” he added.

“They look a very organised team, and we have to be on top of our game if we want to continue our good run.”