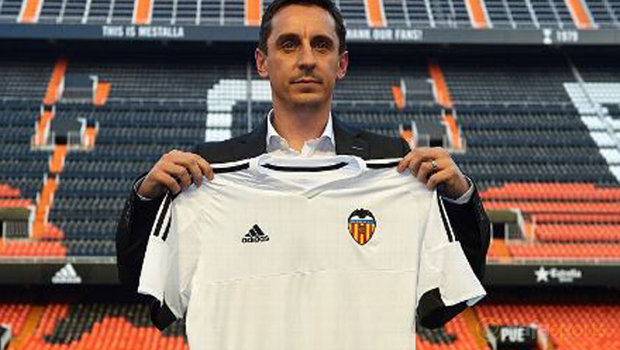 Former Manchester United defender Gary Neville has been named head coach of La Liga side Valencia until the end of this season.

Neville, part of Roy Hodgson’s England back-room team, has spent the majority of his time working as a television pundit since retiring from playing.

The 40-year-old joins his brother and former United and England team-mate Phil at the Mestalla, the latter having been appointed assistant manager at the club in July.

Neville, who quit his role as a pundit with immediate effect but will remain in the England set-up, said he is excited by the chance.

“I am absolutely thrilled to be given this opportunity with Valencia,” he said.

“Valencia are a huge football club of immense standing – and I know from my time as a player the passion and dedication of the Valencia fans.”

Neville’s former boss at Old Trafford, Sir Alex Ferguson, says the ex-full back has the right characteristics to become a successful manager in his own right.

“He is the type of character who is not afraid of making big decisions, which is a vital skill when leading. I think he’ll do well and I wish him, and his brother Phil, good luck.”

Neville will not be in the dug-out when Valencia face La Liga leaders Barcelona this weekend and will instead take charge for the first time in their must-win Champions League home match against Lyon next Wednesday.

Valencia must defeat the already-eliminated Ligue 1 side to have any chance of progressing from Group H.