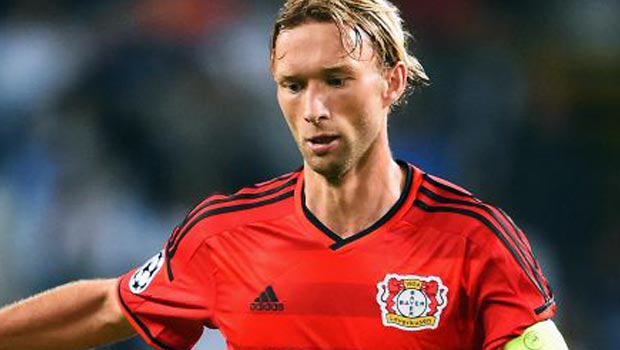 Bayer Leverkusen have no intention of setting out to protect a slender first-leg lead when they face Atletico Madrid at the Vicente Calderon in the Champions League on Tuesday, according to Simon Rolfes.

Hakan Calhanoglu scored the only goal of the first leg in Germany on February 25 to give the Bundesliga club their first round of 16 win at the seventh attempt.

It was the start of a five-match winning run in all competitions for the Germans and Roger Schmidt’s men head to the Spanish capital full of confidence.

Rojiblancos have won 20 of their last 22 European matches at the Vicente Calderon but influential midfielder Rolfes said there was little point trying to pinch a place in the last eight of the competition.

He told reporters: “We’re in a great position to reach the next round [of the Champions League]. We’re not the favourites, but we can’t allow ourselves to defend the whole time. We’ve got to make Atletico Madrid’s life really difficult.”

Team-mate Josip Drmic, who scored two goals in a 4-0 romp against Stuttgart on Friday night, said Leverkusen had no reason to fear their Spanish hosts.

He added: “We know that it’s going to be different and more difficult in Madrid, but we know what we have to do and now we want to go there and execute our game-plan to qualify for the next round.”

Bayer are up to fourth in the Bundesliga table and have a chance to put more daylight between themselves and Schalke when the two clubs meet on Saturday.

Young goalkeeper Bernd Leno said it was important he and his team-mates carried their momentum into a critical period of the season.

He said: “Our plan is for it to be a successful week. We’ve got a fantastic game in Madrid on Tuesday then Schalke, and these are the decisive weeks.”

Atletico Madrid are currently priced at 1.70 in Tuesday’s match betting and the draw outcome is quoted 3.60. Bayer Leverkusen are available to back at 4.90 in the 90 minutes market.