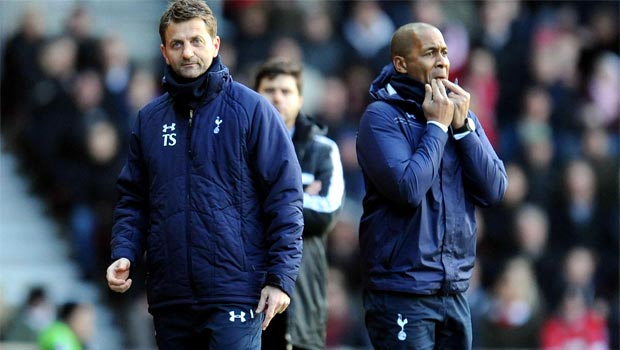 Tim Sherwood is ready to hold talks with Tottenham chairman Daniel Levy about becoming the permanent manager of the club as Glenn Hoddle and Louis van Gaal have both confirmed their interest.

Sherwood was made interim coach when Andre Villas-Boas departed White Hart Lane last Monday following the 5-0 home battering at the hands of Liverpool the day before.

And, while his tenure did not get off to the greatest of starts when Spurs lost a one-goal lead to go out of the Capital One Cup at home against West Ham in midweek, he then guided the team to a 3-2 win at Southampton on Sunday in his first Premier League game at the helm.

Sherwood now looks set to stay in charge for the Boxing Day visit of West Brom and will look to enhance his chances of keeping the job with a second successive league win. But in the meantime he wants to sit down with Levy to discuss the possibility of being the long-term successor to Villas-Boas.

“[What is] ideal for me is to have a chat with the chairman and see what’s best for the football club moving forward,” Sherwood said.

“I need to know what they’re thinking moving forwards. I don’t want this job for five minutes. That’s of no interest to me.

“It is [a case of] are we going to move it forward or not? That’s where we are.

“There are some great candidates out there for this job. It’s a massive club with history and tradition. It is fantastic, a great honour to represent them, but it needs to be right for me and, first and foremost, right for the football club.

“I need to talk to the chairman and see what he’s got planned. I’ll see him [today] because I’m in at the training ground.”

Meanwhile, former player and manager Hoddle, who spent two years in charge between 2001 and 2003, revealed that “I would want to go back” if he was offered the job even if it was on a temporary basis.

Current Netherlands coach Van Gaal, whose contract with the Dutch expires after next summer’s World Cup in Brazil, is the latest possible candidate to make his interest known.

“I’ve always said that I want to work in the Premier League, so there’s a chance,” he said. “But I’ve also read that Frank de Boer and Guus Hiddink were in the picture.”