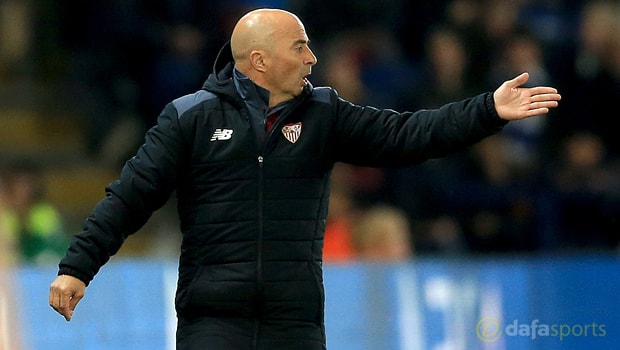 Sevilla manager Jorge Sampaoli is adamant that he has not been contacted by Barcelona as they look to replace Luis Enrique at the end of the season.

The former Barcelona midfielder confirmed earlier this month that he was to step down at the Nou Camp, following his side’s 4-0 defeat to Paris Saint-Germain in the Champions League.

Although his side reversed that result and went on to win, Enrique is still on his way out of the Nou Camp and Sampaoli is one of the favourites to replace him.

The former Chile boss has enjoyed a solid first season in charge at Sevilla, with Los Rojiblancos currently third in the La Liga table.

He is out of contract in the summer and the club could also lose sporting director Monchi, who is also being linked with the exit door.

Despite the speculation, Sampaoli insists he is not planning on leaving and his future does not depend on Monchi’s next move.

He told reporters: “I do not have to renew because I have a contract. Nor is it real that Barcelona have taken an interest in me, they did not contact me.

“I would like Monchi to stay, but it is not a condition for me to stay.

“According to the football project that has Sevilla, one is here to help or not, I feel useful, loved and respected.”

Sevilla will get the chance to move level on points with Barcelona on Sunday when they take on Atletico Madrid.