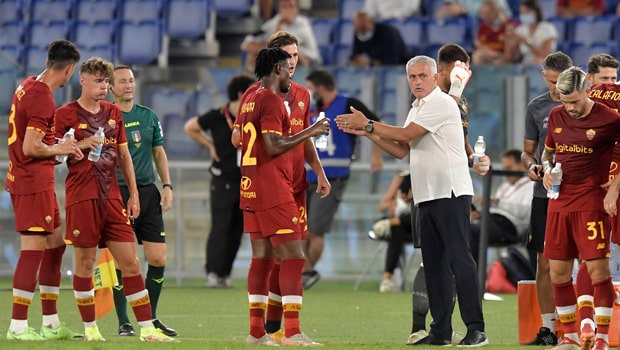 Jose Mourinho has won his first competitive match as AS Roma coach after defeating Trabzonspor 2-1 away from home in the UEFA Conference League clash.

Meanwhile, the away goal rule no longer count in European competition. Roma got their goals from Lorenzo Pellegrini’s cushioned volley and an Eldor Shomurodov.  Andreas Cornelius had equalised for the hosts before they were pegged back and eventually defeated by the Serie A side.

Speaking after the game, the former Chelsea boss it was not easy for Roma to win the game against such a top opposition, adding that they ‘remained balanced and solid’ throughout.

While describing the Turkish side as a Champions League team, Mourinho said the game doesn’t look like a Conference League level affair, adding that have a lot of experienced players who piled pressure on his lads.

While noting that there was pressure on his team, the special one noted that the fans also played their part.

Reiterating that his team remained balanced and solid, which is the important thing, Mourinho admitted that they struggled a little after the break purely on a physical level, citing Jordan Veretout and Bryan Cristante who haven’t been fully fit.

He further expressed concern about their lack of cutting edge when they get into the opponent box on several occasions, adding that some players didn’t entirely follow the tactical plan.

Expressing his love for the team, Mourinho said his feelings would’ve been positive even without the victory.

The second leg of the Conference League will hold next Thursday in Roma’s Stadio Olimpico, and a 50 percent capacity will be allowed due to the COVID-19 cAPACITY. It’s even only those who have tested negative will be allowed into the venue.

Speaking ahead of the return leg, he said the Olimpico crowd will have its say on Thursday and hopes they reach the group stage of the Europa League.

Before then, Mourino will decide the players to use for the match.