Posted by OLADIPUPO MOJEED on February 9, 2022 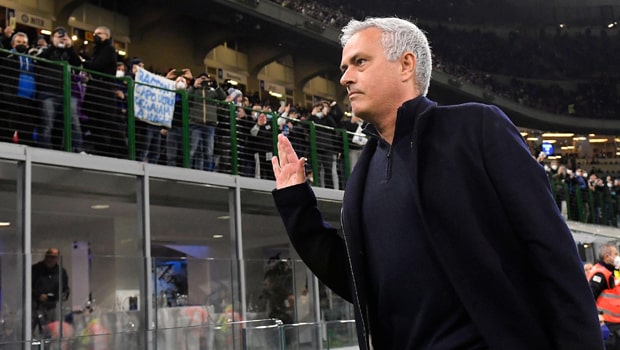 Serie A champions Inter Milan have progressed to the semi-finals of the Coppa Italia after defeating AS Roma 2-0 at the San Siro stadium in the quarter-finals of the tournament.

They will go on to face either AC Milan or Lazio in the semi-finals, which will be the only round of the tournament played with home and away legs.

It was an emotional evening for Roma manager, Jose Mourinho, who won the Treble with Inter in 2010. The Portuguese coach remains a hero to the Nerazzurri supporters, who made a loud cheer when his name was read after the team list. This is the first time he faced Inter as an opponent in the stadium.

In the reunion for ex-Roma centre-forward Edin Dzeko with his former teammates, the Bosnia striker wasted no time in putting Inter in the lead. Dzeko only needed 90 seconds to score against his former club after an assist from Ivan Prisic.

Perisic from the left side of the pitch released a cross, which Smalling completely failed to cut out. Dzeko took advantage of that with the cushioned volley off the inside of the right boot to open the scoring for the hosts.

Inter had the last smile in the game Alexis Sanchez, and Arturo Vidal were brought in to support Edin Dzeko while Roma relied on Nicolò Zaniolo and Tammy Abraham.

The host continued their flurry of attacks with another rocket shot from Nicolo Barella from 25 metres, which cannoned off the crossbar.

Milan Skriniar’s free header from a freekick was straight at Rui Patricio from seven yards.

Inter continued to dominate the game and got a freekick when D’Ambrosio was flattened by a clumsy Ibanez challenge on the outside edge of the box.

Patricio made another save, stopping Dzeko’s header from going in.

Chris Smalling’s nightmare continued as he later gave away a corner with a horrible back-pass from midfield.

It took Roma about 15 minutes to settle into the game. Afterward, they started creating chances.  Karsdorp released a through ball for Mkhitaryan, who rolled across from the right but missed the target.

Abraham later released a great pass lay-off for Zaniolo, who forced Handanovic into from 12 yards with his legs.

In a bid to slow down Inter’s tempo, Patricio threw in an extra ball on the pitch, Zaniolo got booked for putting an arm out in front of Bastoni while Mancini also entered the book of the referee for a tackle on Alexis Sanchez.

Smalling continued to wobble as he put out the ball for a corner from a freekick when there was nobody there.

Bastoni was later stretched off the pitch from what looked like an ankle injury. The defender landed awkwardly and twisted his ankle. Stefan De Vrij was brought on in his place a minute before halftime.

Roma started the second half brightly as Abraham skinned his defender, through ball for Zaniolo, but Handanovic quickly rushed out to smother at his feet.

The Englishman later sprint into the box, but Skriniar blocked his shot. Roma continued the push for an equalizer with some attacks. Veretout got a chance but fired his shot over the bar.

Inter left a big gap in their defense for Mkhitaryan’s through ball for Zaniolo but he scuffs it wide.

After Abraham shot was charged down, Sergio Oliveira’s shot from distance was deflected and Handanovic had to fly and fingertip it over the bar.

Barella released another rocket volley from miles out, Rui Patricio flies to palm it out from under the bar.

Inter will later in the half double their lead with a fantastic goal from Sanchez. The Chilean released a rocket from 25 yards to the far top corner, and Patricio was helpless.