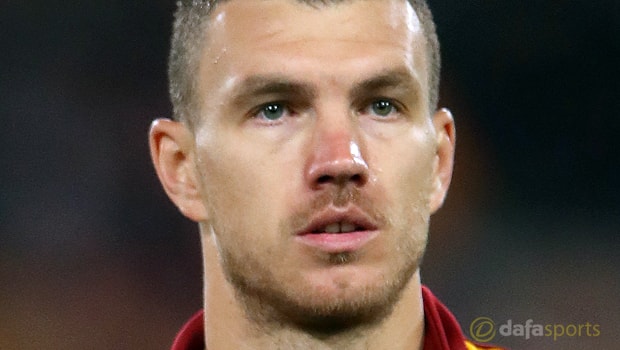 Edin Dzeko admits he did hold talks over a proposed January switch to Chelsea but insists he is more than happy to still be a Roma player.

The Bosnia and Herzegovina international was heavily linked with a move to Stamford Bridge during last month’s transfer window but the switch ultimately failed to materialise, with Dzeko remaining at Roma and Chelsea instead signing Olivier Giroud from Arsenal.

Dzeko has now revealed he did hold talks over a potential return to the Premier League – he had previously played there during a five-year spell with Manchester City – while he was also flattered by Chelsea’s interest.

“It’s true negotiations were conducted and that’s all I can say on the subject,” Dzeko told Klix. “There was a lot of speculation, falsehood and even some funny claims.

“I really was flattered by the interest from Chelsea, a club I respect and admire very much.”

The former Wolfsburg man insists he is happy that the move did not materialise as he is settled in Rome and is hoping to help Eusebio Di Francesco’s side enjoy a successful second half of the season.

“For the past few weeks, a lot of stories have been told about my departure from Roma, and yet I’m still here,” Dzeko added.

“At the end of the day, I’m happy to stay at Roma because Rome has become my home and an indelible part of my life.”

Dzeko is likely to feature for the first time since the close of the transfer window when Roma visit Verona in Serie A on Sunday.