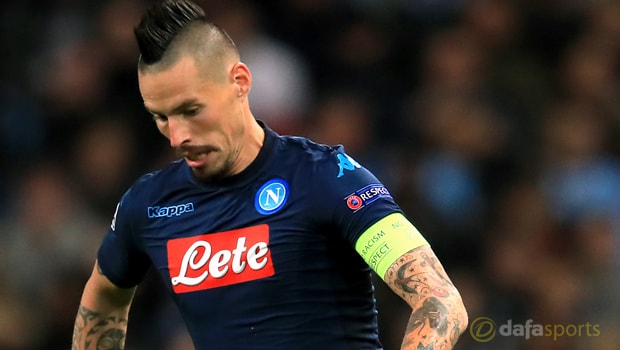 Napoli star Marek Hamsik insists his side have not given up on their Scudetto hopes after losing ground to Juventus.

The Partenopei have managed just one point from their last two games after losing at home to Roma and playing out a 0-0 draw at Inter Milan.

Juve now hold a four-point lead at the top of Serie A but Hamsik insists Napoli can still claim the top prize in Italy this season.

“We have to believe to the end, there’s still the head-to-head game [in Turin on April 22] and Juventus have two tough away games [Inter and Roma] in the run-in.

“Anything can definitely happen. The League still gives us opportunities, there are so many points and so many games.”

Napoli host Genoa on Sunday and Hamsik says it is vital his side get back to winning ways this weekend to keep the pressure on Juve, who travel to struggling Spal on Saturday.

He added: “We need to keep going and believe, because we’re trying to do something huge. There are 10 matches to go, with a head-to-head game and difficult matches for them.

“Now we’re thinking about Genoa. They’re a difficult opponent and have grown in the last few months.