Posted by OLADIPUPO MOJEED on February 22, 2021 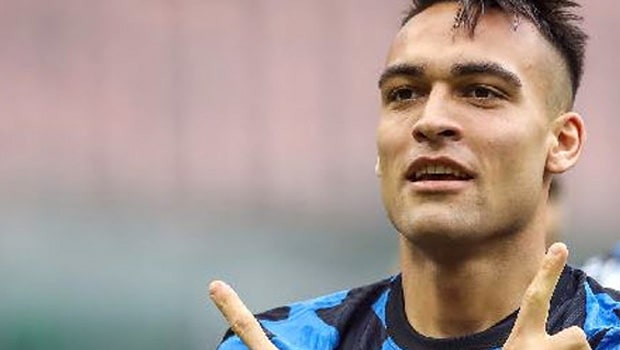 Inter Milan striker Lautaro Martinez has expressed his excitement over the team’s 3-0 win over AC Milan in the Milan derby.

The win consolidated their position on top of the Serie A table, extending the lead between them and th3ir city rivals to four points. The Argentine scored a brace before his strike partner, Romelu Lukaku, sealed the win with a solo effort.

Inter took the lead in the fifth minutes when Romelu Lukaku broke down the right to release a teasing cross to Martinez, who buried the header into the net from six yards.

Inter got the second, scoring against the run of play. Lukaku was also involved in a well-worked team goal. Achraf Hakimi released a pass to Eriksen, who later passed to Ivan Perisic. The Croatian released a pull-back for Lautaro Martinez to tap in from six yards.

Lukaku then put himself in the record book to become the first to score in four consecutive Serie A derbies since Romeo Benetti in 1972-73. Benito Lorenzi last achieved the feat in 1950 for the Nerazzurri.

While noting that the players work daily to put Inter on top, Martinez said the squad wants to continue.

Speaking with DAZN after the game, Martinez said they fight altogether, having suffered a lot this season.

Inter had already been eliminated from Coppa Italia and Champions League this season, leaving them with only the Scudetto.

Speaking on the Belgian striker’s performance, Martinez said there is room for improvement for him as he is a young striker who works hard on and off the pitch.

While describing Lukaku as a great person that the team is happy to have, the Argentine lauded the team’s goalie Samir Handanovic for making three saves at the beginning of the second half. The saves kept them in the game.

Inter showed complete dominance over their hosts at the Stadio Giuseppe Meazza in the Derby Della Madonnina. Both clubs played the derby for the first time since April 2012 as table toppers.

Inter had leapfrogged the Rossoneri to the top of the log after suffering a shock 2-0 loss to Spezia last week. In their previous meeting, which was in an ill-tempered Coppa Italia quarter-final last month, Zlatan Ibrahimovic was sent off. Christian Eriksen scored a last-gasp winner to take the Nerazzurri to the next round.