Posted by OLADIPUPO MOJEED on November 8, 2021 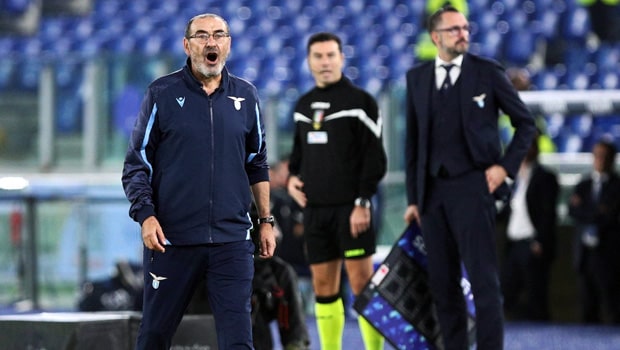 The meeting between Lazio and Salertania could be termed Lotito derby as both clubs are owned by Claudio Lotito.

Maurizio Sarri’s men had the last laugh with goals from Ciro Immobile, Pedro and Luis Alberto. Although the visitors rattled the woodwork twice, they were no match for Lazio.

The visitors almost scored own goal when Norbert Gyomber slid in to stop Pedro from meeting Sergej Milinkovic-Savic’s pass at the back post.

After becoming the club’s all-time highest goalscorer, Ciro Immobile, who received an award before kick-off added to his tally against at the Stadio Olimpico.

The Italian striker scored a header from ten tards from Pedro’s flick after receiving Milinkovic-Savic’s pull-back from the by-line.

Pedro then got his name on the score sheet when he turned Gyomber with embarrassing ease to go clear and beat Vid Belec one-on-one.

S8ubstitute Milan Djuricic came almost made an instant impact for the visitors within 60 seconds of coming on the pitch when his header thumped the crossbar with Pepe Reina beaten on Franck Ribery’s assist.

The pole came to Lazio’s rescue again. It was Ribery this time. The Frenchman’s angled drive bounced off the base of the far post.

Lazio then put the icing on the cake with a third goal from Luis Alberto’s precise snooker shot. The midfielder chested down a long ball before bending it perfectly around defender and goalkeeper to ricochet in off the inside of the far post.

Immobile almost got a brace. From another Pedro assist in the final minutes, his finish bounced off the base of the far post after a deflection.

Meanwhile, Hellas Verona repeated what they did to Napoli last season by holding the Serie A leaders to 1-1 draw,

This was the exact result in the last match of last season that stopped the Pertonopei from qualifying for the Champions League at the expense of Juventus that eventually secured the 4th spot last season.

This is the second time of the season that Napoli have failed to win this season in the Italian Serie A.

Even though Verona ended the game with nine men, the Partenopei couldn’t take numerical advantage.

Also in the Milan derby, AC Milan and Inter Milan played out a 1-1 draw.