Posted by OLADIPUPO MOJEED on December 6, 2021 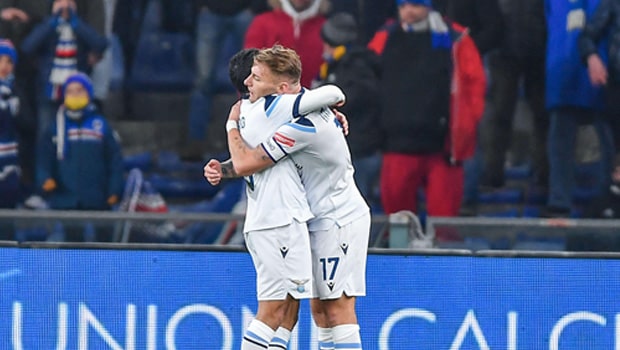 Lazio talisman, Ciro Immobile scored twice as his team swept aside a sorry Sampdoria in the first half, while Sergej Milinkovic-Savic got sent off followed his goal for dissent.

Away from home, Lazio needed just seven minutes to break the deadlock. Immobile shrugged off Alex Ferrari on the edge of the area as Mattia Zaccagni released the slide-rule pass for Sergej Milinkovic-Savic to take it the first time with the inside of the left boot at the far post.

Zaccagni got involved in Lazio’s second goal again as he dribbled between two and went down on the edge of the box. It was left for Immobile to pounce on the loose ball to sweep home from 12 yards.

Having made a save from an Immobile free header from Zaccagni’s cross, Emil Audero was helpless when Julian Chabot allowed Immobile to turn on a Milinkovic-Savic through ball and smash the angled drive across him.

The unimpressive performance made Sampdoria fans jeer off their team at half-time.

Meanwhile, the hosts made three changes and the result was an immediate reaction.

Strakosha kept Lazio in the game with a tough save as he got down quickly to palm Manolo Gabbiadini’s header off the line with one hand.

Lazio were later reduced to ten men after, as Milinkovic-Savic was pulled back by the jersey and protested with the referee he didn’t receive a free-kick, went into a lunge on Tommaso Augello and was booked.

Milinkovic-Savic was wearing the captain’s armband. He continued his complaints and said something excessive. This earned him a second yellow card moments later.

despite being a man down, Lazio continued until Maya Yoshida turned a free header off target from Candreva’s set to play.

Gabbiadini later scored a consolation goal in the final minute with spinning to score from 12 yards on a Riccardo Ciervo cross from the right.

Meanwhile, Juan Cuadrado and Paulo Dybala were both on the score sheet as Juventus secured a 2-0 victory over Genoa. Chievo Verona beat Venezia 4-3, Florentina defeated Bologna 3-2, and Spezia played out a 2-2 draw with Sassuolo.