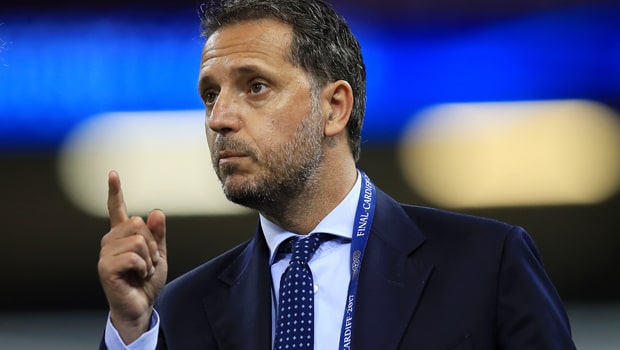 The Old Lady are on the hunt for a new manager following Massimiliano Allegri’s departure. Allegri guided Juve to the Serie A title in each of his five years in charge, as well as two Champions League finals, but it appears both he and the club felt the time was right to move in a different direction.

City boss Guardiola quickly emerged as one of the frontrunners to take over at the Allianz Stadium, something that was immediately dismissed by the Premier League champions and now Paratici has confirmed there was nothing in that speculation.

“I think we live in a strange world,” Paratici told DAZN. “We did not have any contact, we never even thought about it, because [Guardiola] is under contract.

“It all seems very strange to me.” Under-fire Chelsea boss Maurizio Sarri now appears to be the leading candidate to succeed Allegri, with his future at Stamford Bridge continuing to look tenuous.

Indeed, Sarri’s last match in charge of the Blues could well be Wednesday’s Europa League final against Arsenal and Paratici may have just dropped a hint that Juve will make their move for the 60-year-old after the game in Baku.

“We have clear ideas, we have already said it, we are doing our evaluations, and there are still many competitions in progress,” Paratici added.

“Until all the competitions end, it seems to me right, out of respect for everyone to remain in this situation.”