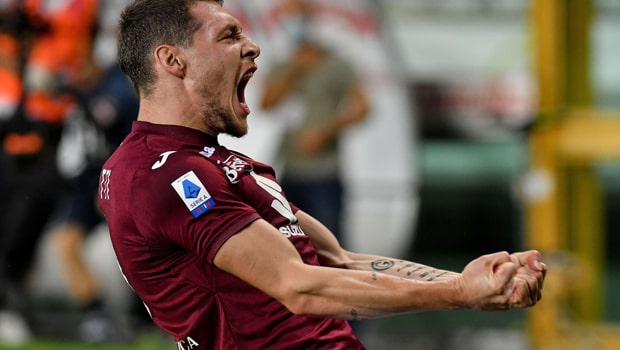 Inter may be adding another striker to their rank after the departure of Romelu Lukaku to Chelsea.

Although the Scudetto champions have signed Edin Dzeko, reports in the media say they have opened talks with Torino to sign Andrea Belotti.

Meanwhile, the champions give a condition to signing the Italy striker who has a year left on his current deal. Belotti is yet to reach an agreement to extend his stay with the Granata. This has made Inter interested in him. It was gathered that Garanat is ready to let him leave for €22m.

Although the latest report in Italy says, Inter’s priority target is Joaquin Correa as the Lazio striker wants to leave the Stadio Olimpico and reunite with Simone Inzaghi.

However, Inter is yet to meet Lazio’s valuation of €40m as they offered only €30m, including bonuses.

Tuttosport reports that Inter CEO Beppe Marotta wants to wrap up the deal for the Argentinean striker quickly. Inter, therefore, expects a reply from Lazio in the next 24-48 hours.

As it stands, if Lazio president, Claudio Lotito, turned down Inter’s offer, the Nerazzurri would pounce on Belotti, which could save them further cost.

In another development, Inter is eyeing Napoli captain, Lorenzo Insigne.

It was gathered that the Nerazzurri wants to sign the winger who has entered the final year of his contract. As it stands, there is no progress regarding contract extension at the Armando Maradona Stadium.

La Gazzetta dello Sport reports that this will allow Inter to sign the striker for free next summer.

Napoli has their financial struggles coupled with the COVID pandemic. This made them offer Insigne a pay cut on his €5m-a-year contract, which he had turned down, except for a new €6m-a-year salary.

Since he is not ready to accept a new offer, the Partenopei are open to selling him for €25m before the end of the summer transfer window.