Posted by OLADIPUPO MOJEED on February 11, 2022 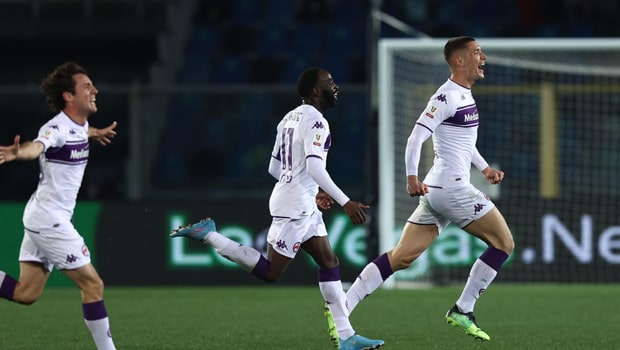 Fiorentina have eliminated one of the Coppa Italia favourites, Atalanta.

The Florence club emerged winner of the tie after a dramatic last-gasp 3-2 away win.

The game went in favour of 10-man Fiorentina through goals from Nikola Milenkovic, Davide Zappacosta, and Jeremie Boga.

Fiorentina will now play either Juventus or Sassuolo in the two-legged semi-final.

The other semi-finals is a Milan derby.

In a match where both teams are without some of their top stars,  Mario Pasalic was used as a False 9, with Jeremie Boga getting his first start.

On their part, Viola went for Krzysztof Piatek upfront, and Lucas Martinez-Quarta also returned to action after a month out.

The game began in a dramatic fashion. Within six minutes, VAR alerted the referee to Marten de Roon treading on the foot of Nico Gonzalez right. He awarded a penalty to the visitors, and Piatek made no mistake converting it to score his ninth goal in just 11 career Coppa Italia appearances.

In a bid to restore parity, the hosts began to attack. A Nico Gonzalez curler was beaten away while Boga’s effort was blocked by Igor. The Ivorian had run from his half before Igor made a decisive block while Ruslan Malinovskyi drilled wide.

Atalanta eventually restored parity via a truly special finish from Davide Zappacosta. The right-back curled the ball into the far top corner from a tricky angle with his right boot, which was simply impossible to stop as it went in off the underside of the bar.

Atalanta failed to take the lead just before the break when Zappacosta rolled across for Boga. With the most delicate of touches off the outside of the boot, it bounced off the upright, and Mario Pasalic couldn’t get the rebound in during a mad scramble.

After Piatek headed Cristiano Biraghi free-kick over the crossbar, Atalanta got into the lead as Boga nutmegged Martinez-Quarta and curled into the far bottom corner with the inside of the right boot to score his first goal for the club since leaving Sassuolo in January.

Fiorentina were again a beneficiary of another spot-kick against the run of play. Teun Koopmeiners failed to look at where he was going, making him mistime his clearance, kicking Youssef Maleh instead.

This time around,  Piatek’s spot-kick was parried by Musso this time, but he turned in the rebound for 2-2.

As Atalanta continued their attack with the hope for another lead, they got a boost after Fiorentina were reduced to 10 men. Martinez-Quarta was given his second yellow card of the match and subsequently sent off for a sliding tackle on Muriel in full flight.

Fiorentina will eventually win it deep into the stoppage time through substitute Nikola Milenkovic’s control and a half-volley from Biraghi free-kick from the edge of the box.

Before the referee finally awarded the goal, it took several minutes of VAR check. When it was ruled as a goal, it became the last kick of the game.