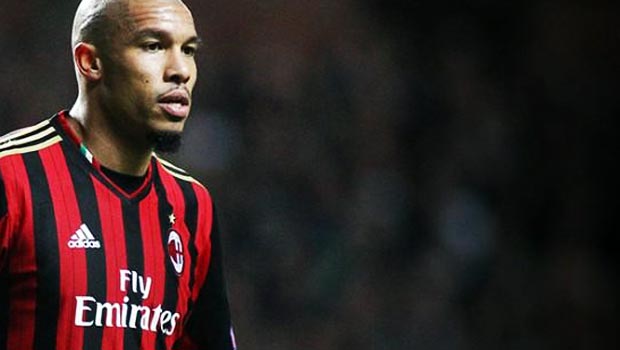 Nigel de Jong has revealed he wants to extend his current AC Milan contract following recent speculation linking him with a potential return to England.

The Dutchman joined the Rossoneri from Manchester City in the summer of 2012 after helping the Citizens win the Premier League title and has been one of the standout players for the San Siro outfit in what has otherwise been a disappointing few years.

However, after a strong World Cup for the Netherlands, he at one stage looked like he could be one of the players to follow his former international coach Louis van Gaal to his previous club’s local rivals, Manchester United.

No move materialised and he remained with Milan, who are currently 11.00 to win Serie A, as new boss and club legend Filippo Inzaghi looks to rebuild the squad.

Having previously been one of the dominant forces in European football, the Rossoneri are now the underdogs domestically with Juventus, who have won the league for the last three seasons, the current 1.85 favourites to retain their crown this term.

De Jong is adamant the seven-time European champions are moving in the right direction and plans to show his commitment by pledging his future to Milan.

“I want to stay at Milan and I repeat that I want to end my career here,” he told Il Giornale.

“Milan is a club with a history and an extraordinary tradition – if they cannot finish first then they must always fight to be in the top three.

“I know it is tough, I know that there are many teams as strong and organised as we are, but we have to try. At what point will there be a new contract? I know that the club has contacted my agent and there is an appointment for next week.”