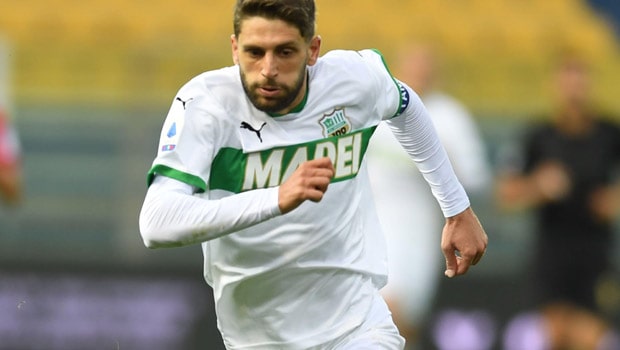 As the European championship continues, several players in the Azzuri squad continued to be linked with a move away from their respective club. On the radar of AC Milan is Sassuolo winger Domenico Berardi. It is Milan interested in the winger as English club, Leicester City continues to monitor the situation.

Berardi has been performing well for the Azzurris in the Euro 2020 tournament. This has made him be on the radar of several Serie A and Premier League clubs. So far, the  26-year-old has recorded two assists in three appearances at UEFA Euro 2020.

Il Corriere dello Sport reports that there are still no official offers on the table, but preliminary talks have begun with Sassuolo.

With two years left on Berardi’s contract at the Mapei Stadium, Sassuolo could use the opportunity to receive huge cash for the in-form winger, who is a product of the club’s academy.

The 26-year-old made his senior debut in a Coppa Italia tie against Avellino in 2012 and scored 105 goals in 291 appearances with the Neroverdi.

According to La Gazzetta dello Sport, both Liverpool and Tottenham have expressed interest in the Italy international. This was then confirmed by Il Corriere dello Sport, stating that other Serie A and Premier League clubs are monitoring the situation.

As AC Milan began to prepare for Champions League football, they have reportedly succeeded in securing the service of loanee Brahim Diaz for another season.

Meanwhile, Olivier Giroud remains the club’s priority as they aim to strengthen their attack. Chelsea had unilaterally extended his stay at the club, but he could decide to move to a foreign club. He favours a move to the San Siro because of lack of playing time at Stamford Bridge, affecting his place in the French squad.

On Brahimi Diaz, Sky Sport Italia journalist Gianluca Di Marzio revealed that Milan and Real Madrid had reached an agreement over the return of the creative midfielder to the San Siro after a successful loan season. Milan is therefore expected to pay €2m or €3m for the player’s loan. They could also activate his buyout clause in the region of €22m, while Real Madrid has a clause to re-sign the player for €27m.

Although Giroud is their number one target, AC Milan has lined up Real Madrid’s Luka Jovic as their alternative to the Frenchman. Another alternative on their list is Alvaro Odriozola.