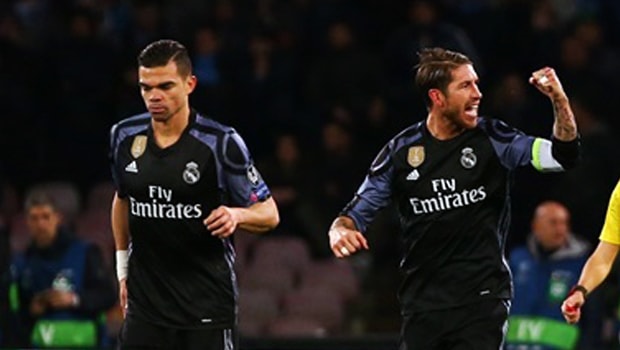 Sergio Ramos has demanded that his Real Madrid side improve despite booking their place in the quarter-finals of the Champions League on Tuesday.

The skipper marked his 100th game in the competition by netting twice as Los Blancos overcame a spirited Napoli 3-1 to secure a 6-2 aggregate victory and continue their bid to become the first team to successfully defend the Champions League trophy.

Despite the convincing nature of the scoreline, Zinedine Zidane’s men were second best for much of the game at the Stadio San Paolo and the Frenchman was less than impressed by their performance.

Real have been sluggish in recent weeks and despite still having a game in hand on old rivals Barcelona, have dropped to second in La Liga, while they are also out of the Copa del Rey.

Speaking after the match, Ramos echoed his coach’s thoughts, insisting that they have work to do if they are to make it to June’s final in Cardiff.

“It was my 100th game in the Champions League and I wanted to help with goals at a tricky time,” he is quoted as saying by UEFA’s official website. “We suffered, but we got through it together.

If we knew the formula then everything would be very easy. “Sometimes things don’t go as you have worked on them.

It’s a game to reflect on, especially in the first period. Despite that, I’m happy to go through but we need to reflect on the errors we made.”

Real are currently 4.75 to win the Champions League and the 1.85 favourites to top La Liga.