Seb Larsson playing through the pain for Black Cats 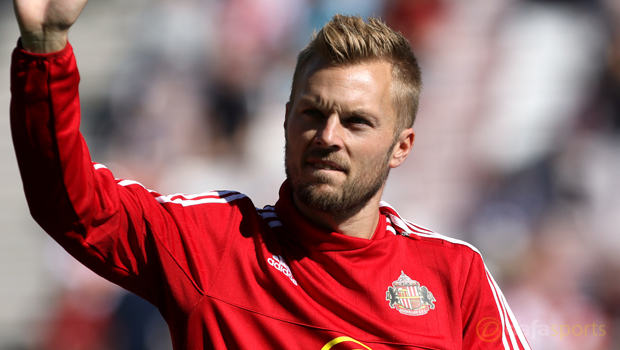 Sunderland’s Seb Larsson says he is playing through the pain barrier in order to help the Black Cats turn their season around.

The Swede was Sunderland’s player of the year last season but has been struggling with injury this term.

Despite an ongoing knee ligament problem, he started the Black Cats back-to-back wins over Crystal Palace and Stoke that ensured they lifted themselves out of the bottom three.

Larsson was substituted after less than an hour of the clash with Stoke last weekend and says he was struggling so much he was not able to take set pieces as normal.

“Yeah, I was struggling on Saturday, from the start really,” he said. “I was desperate to take a few free-kicks, but I’ve had this problem, so there was no need for me to get on set pieces.

“But I wanted to stay in the game, rather than causing more damage.”

Larsson is facing a battle to be fit as Sunderland seek to repeat last season’s heroic draw against Arsenal at the Emirates this weekend.

He is desperate to play against his former club and, while he knows the importance of the six points Sunderland have taken recently, Larsson says things can change quickly ahead of what looks a tough assignment against the Gunners.

“Two wins is massive for us and sends a message that we’re a team on the up. But we know how quick it can change,” he added.

Back in May, Dick Advocaat’s Sunderland produced a stirring display of defensive resolve to hold Arsenal scoreless and secure their top-flight survival.

Sam Allardyce will be contemplating another backs-to-the-wall 90 minutes on Saturday.

Sunderland are 9.50 to keep a clean sheet against Arsenal while they are 12.00 to win their Emirates clash. Arsenal are 1.22 to win the game.