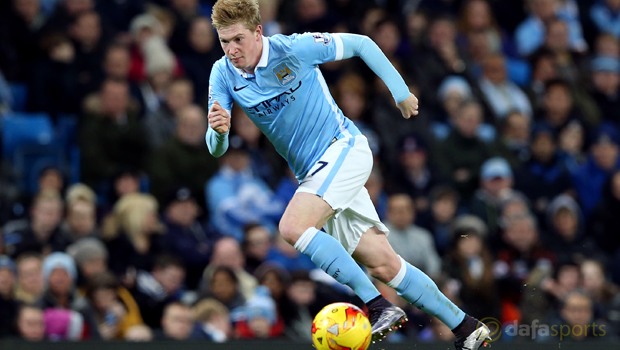 Raheem Sterling has compared the impact of Kevin De Bruyne at Manchester City to that of his former Liverpool team-mate Luis Suarez.

De Bruyne joined City from Wolfsburg at the end of the transfer window and took his tally to nine goals for the club with a double against Hull City in the Capital One Cup this week.

The Belgian play-maker also has eight assists and, according to Sterling, there are striking similarities between De Bruyne and Barcelona forward Suarez.

“With Suarez, you knew once he got in and around the box, you knew what he was capable of doing, usually it ended with a goal,” he said. “It’s the same with Kevin, he looks for other players, look at the assists he’s got already and he’s got goals in him regularly as well.”

Sterling says the 24-year-old is already proving City’s decision to pay the Bundesliga side £54m for his services was a worthwhile investment.

“He’s a top player. He’s someone that gets in and around the box and creates and scores goals. That’s great for us to have, every team needs a player like that,” he added.

Having made a similarly high-profile switch to the Etihad Stadium from Anfield this summer for a fee of £49m, Sterling says he is happy with own form so far.

“I always look to beat my total from the last season and I’m on course to do that,” he continued. “I got 11 last year, if I can top that I’ll be happy.”

Manchester City are 2.00 to win the Capital One Cup having been paired with Everton in the last four. The Toffees are 6.00 to lift the cup.