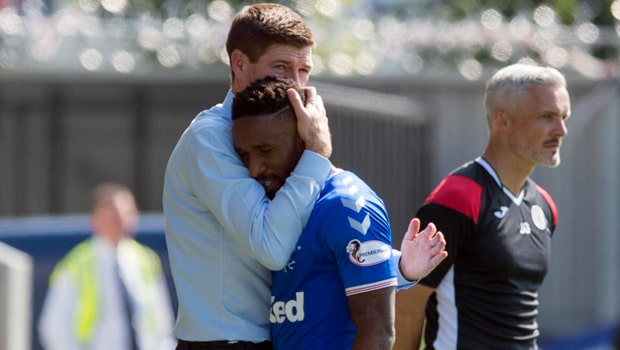 Rangers boss Steven Gerrard has an unenviable task on his hands to pick between Alfredo Morelos and Jermain Defoe for Sunday’s Ibrox showdown with Celtic, according to Hoops legend Kenny Dalglish.

Defoe and Morelos have both been in scintillating form so far this season, with the former netting six in nine already and the latter nine in ten games. Morelos is Rangers’ blue-chip forward and continues to be linked with a possible big-money move before the European transfer window closes on Monday.

The Colombian has been a firecracker in the past, with his disciplinary meltdowns a major concern for Gerrard going into the powder-keg atmosphere of a Glasgow derby showdown ahead of which Rangers and Celtic have yet to drop a Scottish Premiership point this season.

“What will give Steven Gerrard confidence is that his players have been right on it in the early stages of the season, and there is healthy competition for places,” said Dalgleish, who knows Gerrard well from his Liverpool days. “Nobody at Ibrox can take a place in the starting line-up for granted.

That is especially true for the striker role. Right now, you could toss a coin between Alfredo Morelos and Jermain Defoe as they are both in really good form.” Rangers have a Europa League showdown with Legia Warsaw to negotiate before they face Celtic on Sunday and Dalglish says Gerrard will give himself plenty time to make a call.

“Jermain is highly experienced and, as well as being a fabulous finisher, he holds the ball up well. He is comfortable on either foot, and brings his team-mates into play. Alfredo is not quite as polished in terms of link-up play outside the box.

“But the Colombian is first-class in front of goal, and uses his physicality well against opposition defenders. His disciplinary record has been good this season after his five red cards in the previous campaign,” added Dalgleish.