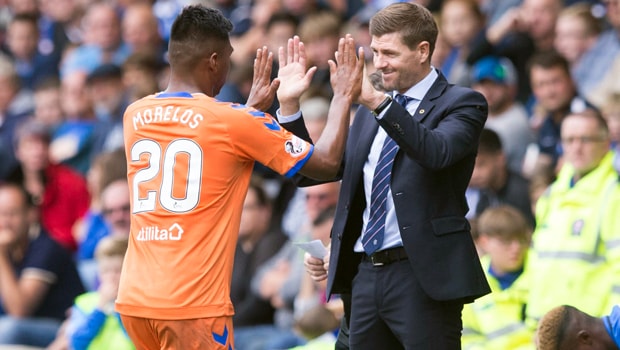 Steven Gerrard has vowed to help Alfredo Morelos learn from his mistakes after the Rangers striker was sent off in their Europa League qualifier in Russia.

Rangers were made to sweat after being reduced to nine men against Ufa, but grabbed the 1-1 draw which sealed their ticket to the group stages.

Morelos and defender Jon Flanagan both collected two yellow cards, ensuring they were scrapping with nine men for much of the second half.

The Glasgow side came through 3-2 on aggregate, leaving Gerrard delighted to be in the Europa League proper. The Ibrox boss wasn’t about to have a pop at his players.

“I’m not going to sit here and criticise the two red cards because those two players have helped us very much since I came in the door. We go up together and we go down together,” he told reporters.

“I’m sure Jon and Alfredo will apologise to their team-mates, but in terms of the nine men who were there from start to finish, I haven’t got words to describe them.”

Striker Morelos has got a fiery temper but Gerrard sees enough talent in him to ensure he is willing to work to help the 22-year-old Colombian.

“I thought in Alfredo’s case the decision was very harsh, so I feel for him.

“I’ve said before I love the player and I love the person, but at the same time all my players need to learn quick that when you come away in Europe sometimes the decisions are not the same as domestically.”