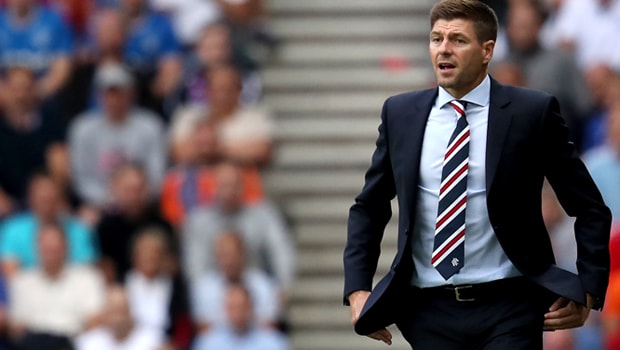 Steven Gerrard feels bringing Kyle Lafferty back to Rangers is a “no-risk” signing after completing a deal for the Northern Ireland forward.

Lafferty has signed a two-year contract after the Gers agreed a deal with Hearts and Gerrard says the “Rangers nut” will be a positive addition.

Lafferty, who previously had a four-year spell at Ibrox, featured for Burnley, Norwich City, Palermo and Sion before returning to Scotland with the Jambos.

He has already endeared himself to Rangers fans this season, scoring the only goal in Celtic’s loss at Tynecastle earlier this month.

Lafferty walked away Rangers following their fall from grace and demotion to the Scottish third division but Gerrard feels his previous experience of the club will stand him in good stead.

“He knows what this club is all about,” said Gerrard.

“He ticks all the boxes I’m looking for. There’s no risk in terms of him performing in front of the demands of this crowd.

“We’re a young squad so he brings vital experience.”

Controversy often wasn’t far from Lafferty during his previous stint in Glasgow’s notorious goldfish bowl. He picked up a ban for simulation in 2009 and was red carded for violent conduct in 2010.

Now older and wiser, Gerrard isn’t about to judge him on past misdemeanours. “I was raw, I made mistakes.

I got over-excited and I don’t think there’s anything wrong with that. I love that in a footballer,” he said.

“With age and experience, I matured and calmed down. But at the same time, still try to play on the edge. That’s where top performances come from.”

Rangers are 6.00 to win the Scottish Premiership title this season, with champions Celtic 1.15 to make it eight in a row.