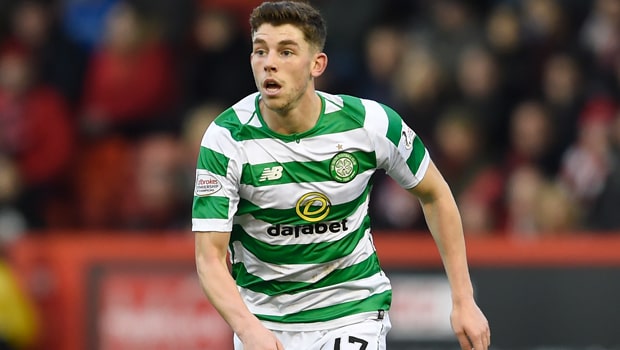 Celtic midfielder Ryan Christie has put his rise into the Celtic first time down to the coaching help he received from his dad Charlie earlier in his career.

The five-times capped Scotland international initially signed for Celtic from home town club Inverness in 2015 but had to wait patiently for a chance in the first team.

He spent time on loan back at Inverness before spending a season on loan at Aberdeen last year, heading to Pittodrie in the same deal that took Irish winger Jonny Hayes to Celtic Park.

However, a lack of transfer activity this summer handed Christie the opportunity he has been waiting for and it is one he has grabbed with both hands.

He signed a new contract with the Bhoys back in November and also scored the winning goal against former club Aberdeen in the Scottish League Cup final the same month.

Christie has now been speaking about his early influences, saying his dad’s help has been invaluable.

“To be fair, he’s always been supportive and he was delighted when I signed my new deal with Celtic. He’s been brilliant – he knows the game and what happens in it and he’s a great person to turn to if I need any help or advice,” he said.

“There was never much pressure put on me and it wasn’t too bad, growing up in Inverness. However, because he coached me, if I had a bad game then the whole team would suffer the team talk and then go home – only I’d go back with my dad and it would keep going until bedtime. It could be a bit relentless.

“Obviously, back then you don’t see the bigger picture; it’s only now that you realise he always had the best intentions.”

Christie will be hoping to help fire Celtic to victory against St Mirren on Wednesday evening to as they try and maintain their position at the top of the table.

He is available at 2.25 to score anytime versus the side 11th in the table.