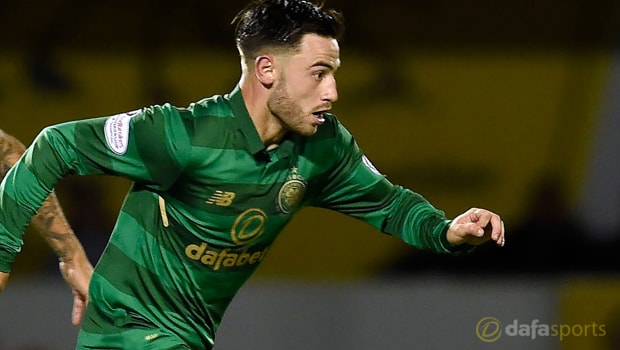 Patrick Roberts insists Celtic will head into their Champions League clash with Bayern Munich at the Allianz Arena in positive spirits.

The Bhoys are currently level on points with the Bavarians in Group B after bouncing back from a heavy 5-0 home defeat to Paris Saint-Germain on Matchday One, by winning 3-0 away at Anderlecht last time out.

Brendan Rodgers’ side will now face home and away fixtures against Bayern, with the double-header likely to define their chances of progressing through to the knockout stages of Europe’s premier club competition for the first time since 2013.

Roberts knows his side will face a tough test against the reigning Bundesliga champions, but he insists they will head to Munich with no fear.

“They are one of the best teams in world football, they have loads of quality players – Lewandowski, Muller, Robben – so we will have to be really on our game,” said Roberts.

“But these are the occasions we strive for and enjoy. So we will look forward to that, be positive, show no fear and hopefully things work out for us.”

The England under-20 international believes the Hoops victory against Anderlecht underlined their credentials in Europe this season and he is convinced they are a better side than they were 12 months ago when they finished bottom of their Champions League group.

“I think the Anderlecht game just showed our quality and our intent this year, particularly after the first game [against PSG],” the Manchester City loanee added.

“You might have thought it was the same as last year, but we had that mentality not to let that happen again.”

Celtic are priced at 21.00 to emerge from Wednesday’s contest with a victory, while Bayern are available at 1.10 and the draw is on offer at 9.50.