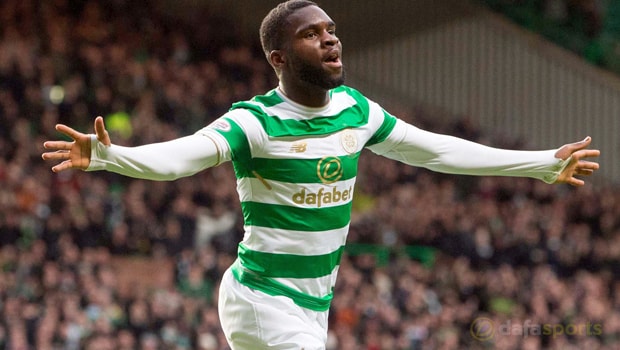 Odsonne Edouard wants another treble and a shot at the Champions League after becoming Celtic’s record singing.

The 20-year-old striker has inked a four-year contract with the Scottish champions, moving permanently from Paris Saint-Germain in a deal that will total £9m with all add-ons included.

Celtic paid £6m to bring the likes of John Hartson, Neil Lennon and Chris Sutton north from England in the early 2000’s when Martin O’Neill was manager but the Glasgow club described this signing as “the biggest transfer in Celtic’s history”.

Edouard played 29 times for the Parkhead side last term and netted 11 goals, most notably when coming off the bench to fire the winner in 3-2 win for 10-man Celtic against Rangers at Ibrox in March.

Edouard was fairly unequivocal in establishing his early goals for next season under Brendan Rodgers, now that he has become a permanent fixture in the East End of Glasgow.

“Hopefully another Treble – win everything. As a striker I want to score as many goals as possible,” he said.

“Of course, the Champions League is another very important objective for me.

“Last season we finished third and went to the Europa league which was good but hopefully this year we can improve. First of all we need to qualify for the group stages and then see where we go from there.”

Edouard described the double he netted in a 5-0 win over Rangers that clinched Celtic’s seventh title win in a row as the ‘highlight of his career to date’ and he feels he is ready to make a big impact in his second season in Scotland.

“I needed time to settle down. Once I did that I started to score and really started enjoying my time here. I want to play as much as I can,” he added.

“I want to score more goals and I also want to win more trophies and league titles.

Celtic is a club which is focused in winning and this is a good environment for me to be in.”

Celtic are 1.08 to win the Scottish Premiership title next season, while Steven Gerrard’s Rangers are 9.00.