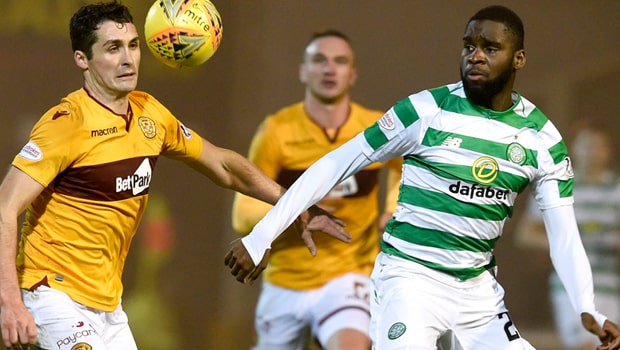 The 20-year-old Frenchman made his loan move from Paris Saint-Germain permanent in the summer when Celtic paid a club-record £9m to bring him to Glasgow.

Edouard has netted 12 goals in 26 appearances for Celtic in all competitions this season, battling with Leigh Griffiths to secure the lone striker’s role in the preferred formation of Hoops boss Brendan Rodgers.

The youngster says being the club’s record signing doesn’t make him any more keen to do well. “I don’t feel any pressure being Celtic’s main striker,” he told reporters.

“I am calm and I just concentrate on doing what I do best, which is to play football. “When I am playing, I give everything for my team. I am impervious to pressure. I have a quiet strength about me.”

Meanwhile Edouard has revealed that the chance to work permanently under Rodgers was a big motivating factor in his decision to move to Scotland permanently.

The former Liverpool boss outlined his vision over the summer, convincing Edouard to put pen to paper and commit to Celtic.

“He told me about his projects and ambitions and spoke about what he wanted to do with me,” added the forward.

“I appreciated his words and it just felt like a good feeling with him. I immediately decided there and then I would sign.

“I needed a new challenge and you don’t refuse a club like Celtic.

“Brendan Rodgers is a very good coach. From day one, he spoke to me a lot and always encourages me. He is very experienced. He has made me a better player and I feel I am progressing very well under him.”

Edouard is 4.00 to score Celtic’s first goal when they face Scottish Premiership leaders Kilmarnock on Saturday. The champions are 5.25 to win the game 2-0.