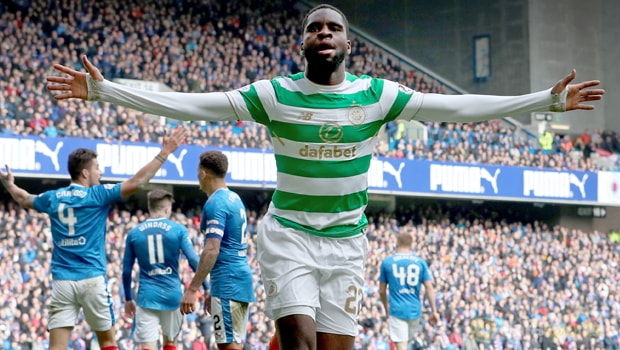 Odsonne Edouard admits he is enjoying life at Celtic although he does not know where he will be playing his football next season.

The former France youth international joined Celtic on a season-long loan from Paris Saint-Germain last summer and it is reported the Bhoys have an option to buy the forward for £7million at the end of the campaign.

Edouard has not been a regular starter during his time at Parkhead, but he has still managed to net six league goals, including the winner against fierce rivals Rangers in last week’s Old Firm clash at Ibrox.

That goal has certainly endeared the 20-year-old to the Celtic supporters and he admits he is enjoying his time in Glasgow after initially finding it difficult to fit in.

Speaking to France Football, Edouard said: “At first, when I arrived, it was a little complicated. There is a change of country and especially of league. There were many differences. I did not give up and it ended up paying off gradually.”

It is not yet clear whether Edouard will remain with Celtic beyond the end of his loan spell and the player himself has confirmed that nothing will be decided until the end of the season, although he has also revealed that he is enjoying life in Glasgow.

He added: “Frankly, I just play and finish the season. I do not think about what will happen next time. I’m having a lot of fun here at Celtic. It is an extraordinary club with a top coach and very big fans. I want to focus solely on my football and to help Celtic as best as I can.”

Celtic are next in action when they travel to Fir Park to take on Motherwell in the Scottish Premiership on Sunday and they are priced at 1.30 to win that match, while the hosts are available at 9.50 and the draw is on offer at 5.50.