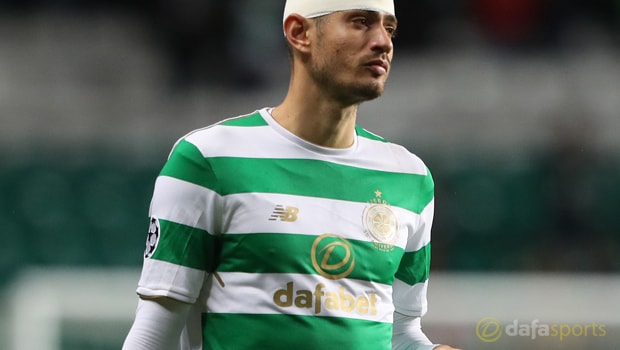 Nir Bitton knows Celtic face a daunting task when they visit Paris Siant-Germain in the Champions League on Wednesday but he insists the belief remains high within the squad.

The Bhoys were beaten 5-0 when the two teams met a Parkhead on Matchday One, with the Parisiens’ expensively-formed forward line of Neymar, Kylian Mbappe and Edinson Cavani running the show throughout.

Celtic have not been the only side on the receiving end of a heavy defeat against PSG, as Unai Emery’s team have won all four of their European games this season by an aggregate score of 17-0.

Those statistics do not bode well ahead of the Bhoys’ trip to the Parc des Princes this week, but Israel international Bitton, who could play at the heart of the Celtic defence in Paris, insists his side do believe they can gain a positive result against their big-spending rivals.

“PSG beat us 5-0 at home but I think we can get a better result and I hope we can do it on Wednesday,” Bitton said.

“The pride is still there and we will go there on Wednesday night and do our best. In every game you go out there and try to get the best result that you can.”

Celtic could seal a place in the Europa League if they avoid defeat in Paris and Bitton admits that is driving the team on ahead of Wednesday’s match.

He added: “PSG are better than Celtic and they showed that in the first game.

But we need to go to Paris and you never know – maybe we’ll be in the Europa League on Wednesday.”