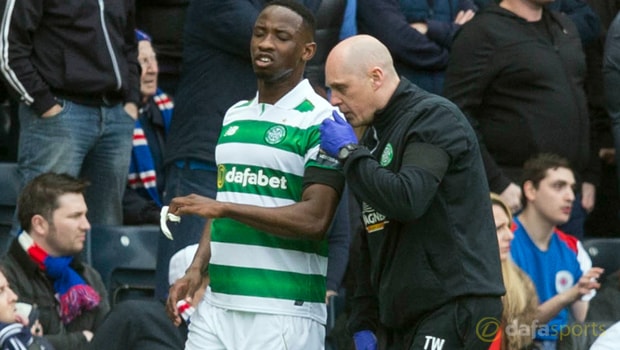 Moussa Dembele says he will not risk his long-term fitness by rushing back for Celtic’s Scottish Cup final against Aberdeen.

The 32-goal striker has been a revelation since joining the Bhoys in the summer but currently finds himself sidelined with a hamstring problem picked up in the semi-final win over Rangers.

Leigh Griffiths has proved an able understudy in the past but has failed to match the Frenchman’s goals this season.

Griffiths is again likely to lead the line when Celtic host St Johnstone on Saturday in a game they are 1.20 to win, with the draw 6.50 and the Saints the 12.00 outsiders.

Dembele admits there is still a chance he could make it back in time for the clash at Hampden on May 27, where Brendan Rodgers’ men will be aiming for the treble, having already collected the Scottish Premiership title and the League Cup.

However, the 20-year-old insists he will not rush back prematurely as he wants to ensure he is fit and firing for the start of next season.

“There’s a chance I could play in the final, maybe, but also maybe not,” Dembele said.

“It’s three weeks until the final, so there’s still time, but I will listen to the physios. With an injury like this, you need to take care.

“I will need to be 100 per cent fit if I am to play, especially with a muscle injury. Otherwise, I will just get injured again, so I will just take my time.”

He added: “If I am not fit in time for the final, then I will come back stronger for the Champions League qualifying games.”