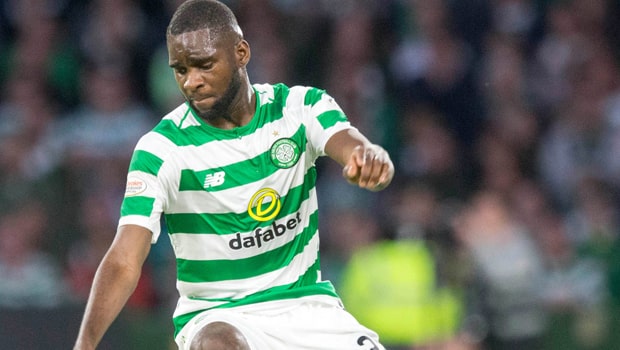 Kieran Tierney has revealed that Celtic teammate Odsonne Edouard is winning his fitness battle for Thursday’s Europa League game against Salzburg in Austria.

The Hoops full-back insists the club’s record signing was lucky to escape serious injury following a scissor tackle from Aberdeen’s Scott McKenna that went unpunished in Saturday’s 1-0 win in Glasgow.

“He’s fine – he’s back training with us,” said Tierney.

“You saw the tackle. It’s one of those things you can’t say too much about; you just need to get on with it and hope that something like that doesn’t happen to you – you continue to challenge in a fair manner and hope that nothing bad happens.

“Odsonne got lucky because his foot hadn’t been planted. It looked a really sore one at the time, though, so to have him back on the training ground is great for us.”

Celtic head for Salzburg having won their opening game 1-0 at home to Rosenborg in the Europa League, while their hosts picked up three points with a hard-earned 3-2 win over Leipzig in Germany.

Salzburg were semi-finalists in the Europa League last season and will present a stern test for Celtic.

Tierney is also glad to have Scott Sinclair, who came off the bench to replace Edouard in the first half against Aberdeen and scored the only goal, regaining his confidence.

“His attitude is 100 per cent right so it’s just about being given a chance and then taking it, which he did at the weekend,” Tierney added.

“I don’t know how many goals he’s scored since he’s been here – probably not too far off 40 – and that shows you that, even though he’s a winger, he’s also a goalscorer.”