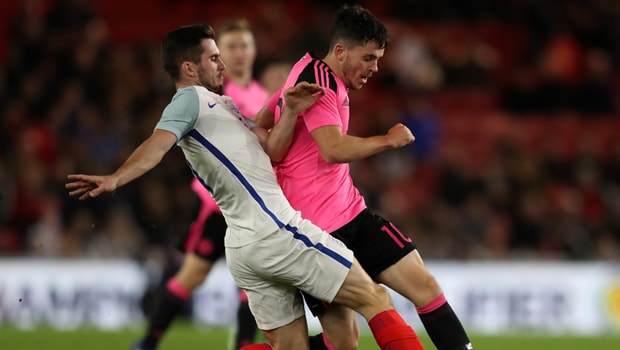 Lewis Morgan is hoping he can break into the Celtic first-team and he is not considering a loan move away from the club.

The newly-capped Scotland international originally joined the Bhoys from St Mirren in January, but he was immediately loaned back to the Buddies and he helped them claim the Scottish Championship title during the season just gone.

The 21-year-old has now reported back for pre-season training with Celtic and he is hopeful of forcing his way into Brendan Rodgers’ side over the coming months.

“I had a wee chat with him [Rodgers] and he welcomed me to the club,” Morgan told Celtic TV.

“He was saying what he expected of me and stuff and just to really kick on in pre-season and try and get into his thoughts.”

Morgan has been linked with a loan move to League One club Sunderland, where his former St Mirren boss Jack Ross is now manager, but he insists he is not thinking about a temporary move and he is confident he can make the grade at Celtic sooner rather than later.

“I always had that belief within myself anyway,” the winger added.

“I know it’s a tough task, the squad here is full of quality and I know it’s going to be tough to break into it but I wouldn’t be here if I didn’t think I could add something to the team.”

The new season will start in earnest for Celtic when they travel to Armenia to take on Alashkert in the first leg of their Champions League first qualifying round tie on July 9.

The Hoops have made it through to the group stage of Europe’s premier club competition in each of the last two seasons and they will fancy their chances of progressing through to the second qualification round at the expense of their Armenian opponents.