Lewis Morgan determined to kick on with Celtic 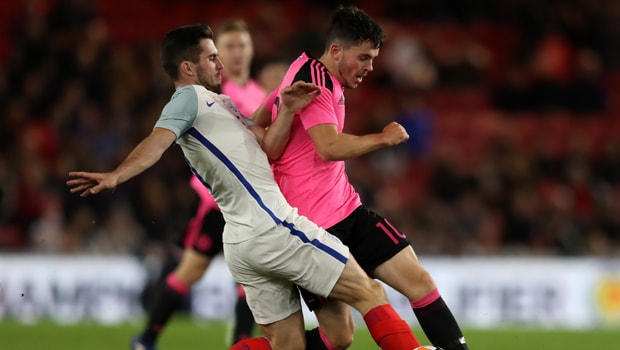 Celtic youngster Lewis Morgan is hoping he can start to make an impact at the club as he tries to kick on at international level for Scotland.

The 21-year-old has yet to play for the Hoops since agreeing to join in January before being loaned back to St Mirren for the rest of the campaign.

His form earned him two caps for Scotland but Morgan believes that regular action at Celtic Park will make him a better player.

Morgan was just one-year-old when Scotland played in the 1998 World Cup and he is determined to help the next generation silence their critics.

After playing against Peru and Mexico last month, the winger is relishing the chance to impress this season as Scotland try to qualify for the European Championships.

Morgan feels he and a number of players at Celtic can make a difference but he knows he has a big challenge ahead as he tries to break into Brendan Rodgers’ starting XI.

He told the Sunday Post: “I feel as if I’m ready to make that step, which I’m sure others are as well.

“It’s always an honour to play for your country. I would have liked a few more minutes on the pitch during the recent tour, but I enjoyed the time I got.

“But that’s just the type of character I am. I’m hungry and want to play as much as I can and, hopefully, I can do that for Celtic, too.

We need to try to stake a claim to stay in the squad when the next qualifying campaign comes around.

“There’s definitely now a nucleus of young players who are ready to break through.

Kieran Tierney has already done it, and it’s players like him I want to go and play alongside at Celtic. “That can help me take my game to the next level.”